The Bedfordshire Grouping in the 19th C entirely comprised labouring folk, living and working in 9 or so villages within 8 m of Bedford town, with one family slightly further out in Kimbolton—just over the border into Huntingdonshire.

Contents of this page: Below are outlines of known individuals and families from the late 18th to mid 19th C. More details may be found on their residence pages: Bedford, Biddenham, Blunham, Bromham, Kimbolton and Souldrop. Later 19th and 20th C individuals and families are recorded under their parents or grandparents, rather than listed separately as here—no living ones are of course mentioned.

Being Labourers little documentary evidence has survived other than their 3 life events of baptism, marriage and burial—and some of these went unrecorded. Only 2 administrations/Wills have been found, both from Blunham in 1831 and 1847. The men would have been similar to this account of Edburton, W Sussex, c 1850:   Read more

‘The population was almost entirely composed of agricultural labourers and their families, with the village shopkeeper, the village publican and one or two market gardeners. These labourers were a strong, hardy set of men, industrious, truthful and honest, with very few exceptions. Their dress was usually a dark smock frock, with elaborate pleating at the shoulders, knee breeches, leather gaiters and laced boots. On Sunday they wore a scrupulously white smock frock. Their food consisted of bread and cheese, vegetables, bacon and pudding, with fresh meat only occasionally.The roads at this time were very narrow, rough and muddy, and locomotion was very slow and difficult, consequently they rarely travelled far from home, some never going out of their own parish’.1
While earlier in this period the men were all Agricultural Labourers, later their trades diversified. Some stayed in the county, others left for work to places like Northampton, Northumberland or Australasia. The descendants of William and Sarah of Kempston, for instance, moved in and around Bedford for at least 100 years, then in the 1850s began moving further afield to London, Northumberland and Sussex. A bird’s-eye view of selected male lines over 2 centuries shows mobility and occupations: 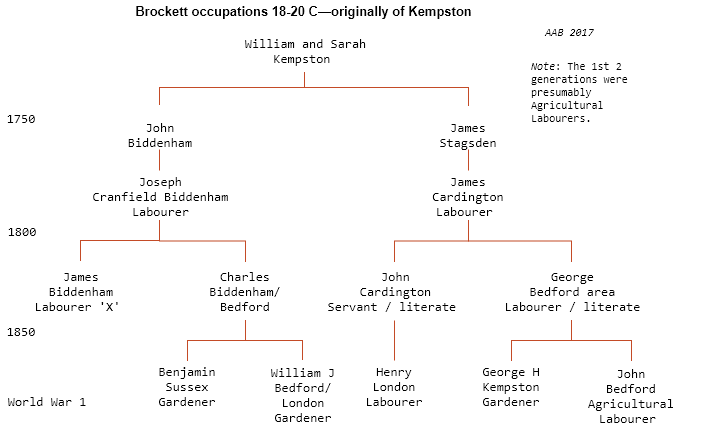 In both halves of the century 1855-1954 London had more Broket births, marriages and deaths in the UK than other counties or cities. Bedfordshire came next in the 1st half but its birth rate dropped by more than half in the 2nd as Brocketts left the county. Census totals 1881 and 1901 show the turn:

James and Margaret HILLS were married in Blunham 23 May 1800. Apart from Scotland, James up to this time was almost exclusively a name used by the Bedfordshire clans. There was only 1 known Bedfordshire James of an age to marry in 1800—bap Bromham 5 Oct 1777 eldest child of William and Elizabeth WILCOX. The other 2 Jameses baptised before 1800—in 1789 and 1791—both married others. The death in Blunham 14 Oct 1845 of James, Labourer, aged 68—of disease of the heart—confirms.2 So James came to Blunham from Bromham, c 8 m W. Margaret’s baptism wasn’t recorded in Blunham. She died 6 Oct 1803 and 15 months later on 3 Jan 1805 he married 2ndly Elizabeth HILLS—perhaps a sister of Margaret—in Blunham. Elizabeth’s baptism wan’t recorded in Blunham either. Did Elizabeth die 1839 Biggleswade District?3 In 1841 James was recorded in Blunham on his own, aged 60, Agricultural Labourer, next door to son William.4 He died 1845.

Elizabeth Broket married George ODELL of Oakley Raynes 16 Oct 1801 in Bromham.5 Also recorded 4 Oct 1801 in Oakley. Not being a Widow, she presumably would have been b by 1791. Her parents aren’t known.

Bromham Parish Register recorded the baptism of a Thomas 21 May 1809, aged 27 on Apr 13, ie b 1782. About 7 years earlier on Oct 12 1801 ‘Thomas Brokit from Bromham’ had married Ann CLARK in Biddenham, Ann’s parish. The couple were progenitors of a clan that flourished in Bromham through the 19th C and now survives mainly in New Zealand.

It’s unlikely that Thomas was an unrecorded son of William and Elizabeth WILCOX of Bromham. More likely is that he moved into Bromham from a nearby parish, some time prior to his marriage. Biddenham is only about a mile from Bromham. Perhaps his parents were John and Mary KENDAL of Biddenham? It’s difficult to believe that he wasn’t closely related to James [son of John and Mary KENDAL] and Lucy BATES of Bromham, who lived a few houses away from Thomas in 1841.

Bap 12 Apr 1789, Stagsden, son of James and Mary GEARY,6 James married Frances CURTIS 8 May 1809 in Odell, Beds, 7 probably Frances’ parish—the only suitable Bedfordshire baptism of a Frances in the IGI was 24 Dec 1786 in Odell d/o William and Elizabeth CURTICE. Contemporaries of namesakes James and Elizabeth of Blunham and James and Lucy of Bromham, James and Frances raised their children in Cardington.

1841: In Cardington, James, aged 50, Agricultural Labourer; Sarah, 15; George, 10—all b in the county. Had Frances just died? Next door was Mary LARKINS, aged 20 and 3 year old daughter.
+++
1851: In the village of Cople, James, aged 68 [ie b c 1783], Widower, receiving parish relief, b Stagsden, was the eldest of 4 male lodgers in the home of Mary FENNYMORE, 76, Widow, b Kempston, also receiving parish relief. The other 3 were a Butcher, aged 37, and 2 Farmer’s Labourers, 32 and 19—all unm, b Cople.
Labourer.8 Died 16 Feb 1853 Union Workhouse, Bedford, aged 71 [more like 64], Labourer, of apoplexy, Mary Ann BROWN in attendance.9 Did Frances die 12 years before him in Bedford District 1841?10 Children all bap Cardington11 except Ann in Odell—probably because of the custom of baptising the first child in the mother’s parish:

John married Jane STOKES 26 Nov 1811 in Blunham and as a family they lived in the hamlet of Chalton.John died 21 June 1847 at Chalton of disease of the heart, aged 57.12 This suggests a birth c 1790, but no suitable baptism has been found. Since 2 others of the 4 incomers to Blunham at this time were sons of William and Elizabeth WILCOX of Bromham, perhaps John was another son of theirs? The only other contemporary John recorded in Bedfordshire Parish Registers and the IGI 1760-1800 married Elizabeth PAIN in Felmersham 1804, and elsewhere the only known John was bap Hitchin 1779. Jane probably died 1865 Bedford District.13

Second son of John and Mary KENDAL, James was baptised 22 May 1791, Biddenham, probable twin of Mary. He married Lucy BATES 14 Oct 1811 in Bromham and they probably lived the rest of their lives there. Their children were all baptised there. Although Bromham was Lucy’s parish—bap there 7 Aug 1791, daughter of Thomas and Ann14—it’s difficult to believe that James wasn’t related to Thomas and his family, a few houses away in 1841. It was a small settlement with no more than a dozen baptisms per year in the 1790s.

They were younger contemporaries of namesakes James and Elizabeth of Blunham and James and Frances of Cardington. Lucy died 1866 Bedford District, aged 75.15 James was recorded as a Farm Labourer that year,16 but died 1873 Bedford District aged 82.17

Joseph was b c 1795 son of John Labourer.18 The marriage certificate didn’t say that his father was deceased, but that may have been an oversight. His baptism isn’t recorded in the Biddenham Parish Register or elsewhere in the IGI, but he married in Biddenham—twice—and all his 8 children were born there. Escaping record in the Parish Register was not unkown, so it’s possible that he was a son of John and Mary KENDAL of Biddenham.

Thomas was probably the son of William and and Elizabeth WILCOX of Bromham, baptised there 1796, and moving to Blunham where his older brother James was—perhaps John too. No other known suitable Thomas was recorded in Bedfordshire or elsewhere.

John married Elizabeth ESTHER in Blunham 12 Oct 1824. His parents aren’t known and his death also wasn’t certified—it’s possible he died 23 Aug 1857 of fever, 1 month, in the Fever Hospital, Bedford, aged 60, ie b c 1797, Labourer,29 but this was much more likely John of Bedford, b Colworth. The couple apparently had no issue. He may have been John of Souldrop 1808-87. Further details here.

He and younger brother Daniel were the only householders in Souldrop in 1881. John died 2 Sep 1887 of decay and diarrhaea 2 days, aged 79, Farm Labourer of Souldrop, at the Union Workhouse, Bedford.30

Joseph son of James and Lucy BATES of Bromham was born 5, bap 25 Oct 1812 in Bromham,31 and died 1879 in Bedford District.32 Occupation 1837, Labourer.33 Only 1 other Joseph is known from this period, the other being the husband first of Anne WRENCH from 1815, and then of Patience TRUEMAN from 1838. Joseph’s 1st marriage to Sarah CORRALL isn’t apparently in the IGI but the 1841 and 61 censuses recorded the family in Kempston. Sarah died 1865 in Bedford District.34 Joseph married 2nd Mary Ann GOSLING 10 Apr 1866 in Bedford Register Office.35 Mary Ann died of senile decay 16 Apr 1915 at 3 Beatrice St, Kempston, aged 79, Widow of Joseph, Farm Labourer, informant A E Brockett, daughter in law.36

John and Eliza INCH . Ancestors of a clan that flourished in Lincolnshire from the 1880s.

Son of Joseph and Anne WRENCH, bap 10 Mar 1822, Biddenham, and died 1877 in Bedford. Married Ann WOLSTON in Biddenham and they raised their children there.