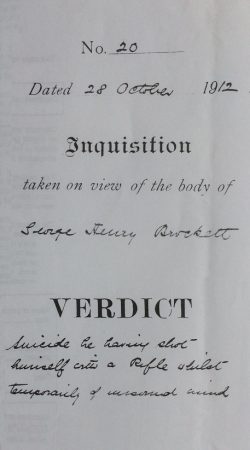 Following are the 4 depositions produced at the Coroner’s Inquest of 28 Oct 1912 at Kempston which found that George Henry Brockett—son of George Henry 1857-94 and his wife Jane—“came to his death by suicide he having shot himself with a rifle whilst temporarily of unsound mind”:1

1. Jane Brockett: “I am a Widow and reside at 36 College Street Kempston. The deceased George Henry Brockett is my son & was born April 22nd. 1892 & was a Labourer employed at Howards Works On Saturday Oct 26th. George told me he was going to stay away from work for the purpose of going to a football match at Stamford About 10.20 am I went upstairs to do some work I thought I heard a door slam in the Kitchen & and on entering the Kitchen I saw George sitting in a chair covered in blood I ran out for my neighbour Hannah Beale I came back at once with Mrs. Beale. Before I went upstairs my son was cleaning his rifle & when I went upstairs he was still cleaning it. He had no trouble whatever either at home or at his work for if he had I should have known & was a steady boy.”

2. George Edward Palmer (1): “… at 10.20 am today Saturday Oct 26th. I was called to 36 College Street Kempston. On my arrival there I found George Henry Brockett age 20 Blacksmiths Striker sitting in a chair his Mother Jane Brockett supporting him he was dead & I found a wound corresponding with a bullet wound in the chest just below the heart the bullet which was one of the latest Lee Metford pattern had evidently gone thro’ the body & hit the Kitchen wall directly behind him on the Kitchen table lay a Lee Metford rifle splashed with blood & on my examining the breach I found a empty cartridge also full of blood a cord was tied round the trigger… As far as I can ascertain this young man was in good health & had not complained at all of feeling unwell previous to this affair I searched the Kitchen & his clothing but found no note or any explanation why this deed was done.”
++++
3. George Edward Palmer (2): “I am a Sergt. of Police stationed at Kempston. About 10.40 am on Saturday Oct 26th. I was fetched to 36 College Street Kempston On my Entering the Kitchen there I found the deceased George Henry Brockett sitting in a chair bleeding profusely from a wound in the chest On my Examining him I found he was quite dead His Mother was supporting his head and shoulders & Hannah Beale was also present. I found that the rifle which I now produced was found between the deceased legs I took possession of it & searched for any note or letter but found nothing bearing on the affair. Nothing was found on his clothing. I searched the floor of the Kitchen & found the caseing of a bullet. which I produce. Slightly higher than the deceased shoulders I found a hole in the wall directly behind where he was sitting the bullet had evidently passed clean thro the body hit the wall & rebounded back to where I found the bullet caseing. I examined the rifle & found one discharged cartridge in the breach this I produce also round the trigger I found the pull thro had been tied the barrel was full of blood also the empty cartridge in the breach. at the loose end of the pull thro I found a piece of rag with rust adhering to it as if it had been pulled thro the rifle barrel once The deceased I find on enquiries was a steady industrious lad & could not find of any trouble or worry connected with him whatsoever.”
++++
4. Hannah Beale: “I am a married woman the wife of George Beale & reside at 32 College Street Kempston About 10.30 am on Saturday Oct. 26th. I was in my house when Mrs. Brockett came running in & asked me to come in at once as her Son George had met with an accident. I ran in with Mrs. Brockett and found George sitting in a chair in the Kitchen blood was coming from his chest I found a rifle between his legs the butt of the rifle on the ground the muzzle lying against his chest close against the wound I took the rifle away & stood it against the chair & it was exactly as I found it when the Sergt. came I know the boy intimately & he always appeared bright & cheerful & did not appear to have a trouble at all or any anxiety.”

[1] BARS HN6/CO/2/12, this image and that of Jane's signature reproduced by kind permission of the Bedfordshire Archives and Records Service.