Three young Agricultural-Labourer Brocket families lived in or near Kimbolton, Huntingdonshire, in 1841, headed by:

Hannah and Sarah were probably sisters, daughters of John and Jane ABRAM/S, neighbours of Thomas.Thomas, Daniel and John lived in Kimbolton the rest of their lives. Were they brothers?

Records of their baptisms haven’t been found, but censuses recorded their birthplaces:

The records for Thomas and Daniel conflict a little but point to the hamlet of Radwell—recorded by 2 separate enumerators in 1871—or perhaps Carlton, a slightly larger village c 4 m SW of Radwell. John consistently gave Hunts as his birthplace. If the 3 were brothers this suggests that their parents moved to Kimbolton by at least 1816. Who were they? 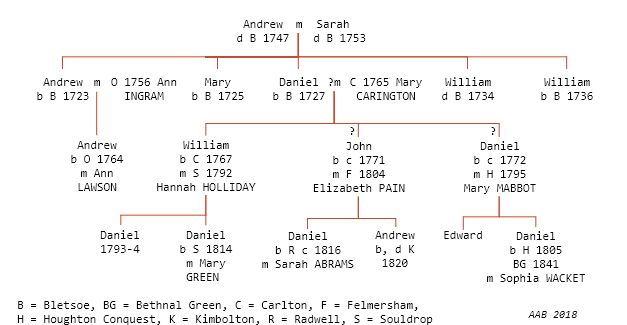 BROCKETT of Kimbolton — the next generation

Did they also have a daughter or cousin Anne?

In 1834, when aged c 21, Daniel was recorded in the Bastardy Papers and Maintenance Orders of St Andrew’s Parish Church, Kimbolton:22+Read more

[1] Census—adult ages were often rounded up or down to the nearest 5.