For the last 3½ centuries Brokets have lived in the adjacent parishes of Guilden Morden and Steeple Morden—mainly the former. The following separate pages cover the 3½ centuries:

This is the font in Guilden Morden parish church where many of them were baptised: 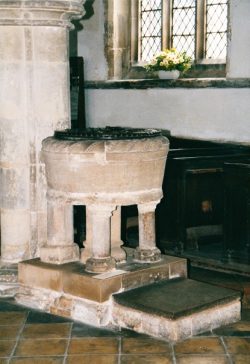 Lying on Cambridgeshire’s SW boundary with Bedfordshire, just below the less fertile, neighbouring parish of Dunton, the land was mainly devoted to arable farming and sheep. The men were Yeomen, Agricultural Labourers, Village Publicans, Butchers, Shepherds and, from the 18th C many were Carpenters. In the 1850s half the 8 or so Carpenters in Guilden Morden were Brocketts.1 From childhood through to old age many of the women were Straw Plaiters:    Read more

Straw Plaiting was a cottage industry in Bedfordshire, Buckinghamshire, Essex, Hertfordshire and Cambridgeshire, largely carried out by women. In 1801 Dunstable, for instance, they began to pick the straw as young as 4; plait at 5; earn up to 2s 6d a week at 6; up to 12s a week by 10; and on average £1 1s a week as women. The more complex and intricate the plait, the more it sold for. Straw-plaiting was cleaner work than black, but not white lacemaking. The only drawback to the industry was that it only lasted for three months of the year. It was said to make the women averse to husbandry work, and bad servants, from their ignorance of everything else. Census figures for Beds and Herts show that the industry boomed during the middle of the 19th C, but fell away sharply towards its end.2

Like the St Neots clan, the Mordens clan was a surviving branch of the Bedfordshire Dunton clan, which disappeared from Dunton in the 2nd half of the 17th C.

For the first 148 years—1685-1833—this Mordens ‘clan’ was actually a single line, with only 2 or 3 households at a time, or 4 if you include the older generation. Towards the end of this period, the Brocket households in the Mordens—indeed in Cambridgeshire as a whole—were those of William and Ann HALL of Guilden Morden, and of their 3 children: John, William and Elizabeth. But thereafter the sons of these 3 evolved into 12 households, with 44 known sons of their own, and as a result most sons emigrated to nearby parishes, London and beyond. Towards the end of the 19th C the number of Morden households fell back to 3 and through the 20th there were only one or two at any one time.

In 2000 descendants of the clan in the UK numbered about 50 families—only one of which has members still in the Mordens—with others in Australia, North America, South Africa and elsewhere.