While most of the sons born 1800-25 stayed either in the Mordens or nearby, only 5 of the 12 born 1826-49 stayed in Cambridgeshire. 7 became Londoners. The larger number of surviving children of fathers born 1800-25 meant that sons often had to look further afield for a livelihood. Following are outlines:1

Sarah wasn’t apparently recorded in the 1891 and 1901 censuses, either as Sarah or Elizabeth. As a Spinster, aged 40, Sarah Elizabeth married 6 Aug 1903 in the Parish Church of St Michael, Edmonton, James Edward ARNOLD, aged 49, Widower, Carpenter, both residing 35 Chiswick Rd, Edmonton.21

5th son of William and Mary BUTCHER, Solomon was bap 31 Aug 1828 Guilden Morden. He married Jane MAY 18 Mar 1855 in St John’s Parish Church, Waterloo, Lambeth, Surrey, he a Bachelor, Carpenter, she a Spinster, both of full age residing Belvidere Rd.23 Interesting that for daughter Elizabeth’s BC 14 Jun 1853 Jane’s name was given as Brockett formerly MAY—they were clearly living together for about 2 years at least before marriage. The family bible shifted the marriage date to 18 Mar 1852.24

Jane bore Solomon 13 children over 26 years, while aged 20-46. Their first 3 children had been born in Battersea, all the rest in Stotfold. Some children’s births they registered, some they registered unnamed, and some they didn’t register.

It looks as though Solomon moved from Guilden Morden to London in his early twenties, some time before Julia’s birth in 1855, probably met his wife and married there. Until between 1858-61 they lived in Battersea St Mary, formerly called Battersea Rise, where brothers William, Alfred, Archer and David and families were around the time. Then by son Arthur’s birth they had returned to village life in Stotfold, c 5 m SW of Guilden Morden. Several of Solomon’s older brothers were Carpenters in Guilden Morden, which is perhaps why he settled in Stotfold. By 1891 there were no Brocketts left in Stotfold. They had probably all returned to London.

1st son of William and Fanny BONNETT of Ashwell, Herts, William was born there 1841. His parents moved the family to Battersea in the early 1850s. On 25 Dec 1866 William married Elizabeth Mary ORBELL in Stepney, Middlesex. By 1871 his parents left for Stotfold, Beds, and William and Elizabeth and their 2 infant sons went with them. Later that year, they—or at least Elizabeth—were living or staying in Graveley, about 2 m E of Hitchin, but two years after that, by 1873 they were back in London, living in Edmonton, where they probably stayed for the rest of their lives. Elizabeth died in Edmonton District in 1922 aged 81, and William in 1934 aged 92. 5 sons, 2 daus.

Only surviving son of John and Marianne COOPER, b 12 Jan 1845, Guilden Morden.111 He married Mary Ann MUNSEY 15 Sep 1866 in neighbouring Wrestlingworth’s Parish Church, Mary Ann’s parish, he aged 22, Bachelor, Groom, she, 19, Spinster, one witness was Mary, who signed with her mark and could have been his mother or sister.112 Mary Ann bore Thomas 12 children over 25 years, while aged 19-44. Thomas and Mary Ann were forbears of a line that mostly stayed in Hitchin, but also went to London and the USA. It’s guessable from the fine photograph c 1900 that Thomas felt that he was a descendant of the 16th C landowning Brokets of Hitchin.113
+++ 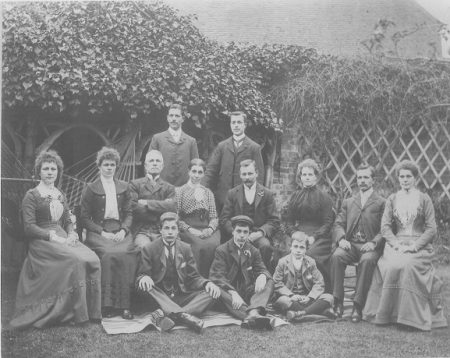 The photo is undated, but if the youngest was aged 7 or 8, it would have been 1900—an auspicious year to photograph the whole family perhaps. Left to right, standing: Wilf, Edwin; sitting: Rose, Lilly, Thomas, Mary Ann, Jack, Sally, Frank, Lizzy; cross-legged: Alf, France, Stan. It’s possible that Lilly and Lizzy have been confused and Alf and France.

Thomas’ occupations, some of which would have taken him away from home:

Their first six children—from John to Wilfred—were baptised in Guilden Morden Church. By 1879 the family was living in Therfield, Herts, just south west of Royston, where at least four of their children were born—Alfred, Edwin, Rose and Francis. The last 2 children—Francis and Stanley—were baptised in Guilden Morden Church in 1887 and 1891. So the family may have moved from Therfield back to Guilden Morden in 1886/7, between Francis’ birth and baptism, when Thomas was about 43. Thomas and Mary Ann lived their later years in Hitchin, at 36 Bedford Street. Children:

There were 3 surviving Thomas Brocketts in Guilden Morden in the 1840s to 70s: a Butcher, an Ostler and a Shepherd. The Ostler, married to Mary Ann MUNSEY, moved to Therfield by 1879, leaving the Butcher and Shepherd—both husbands of Sarahs, but obviously of different generations. Around 1887 Thomas the Ostler returned, and for 3 years till Thomas the Butcher died in 1890, there were three in Guilden Morden. By 1901 Thomas the Ostler had moved to Hitchin, leaving only this Thomas, the Shepherd. 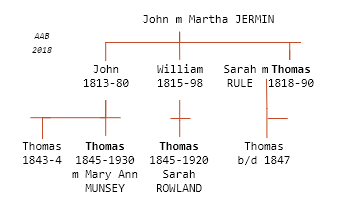 All the daughters went into service to Mr and Mrs Treasure of Kensington Gardens, London.

2nd son of Alfred and Ann CHARTER, Charles was born 1849 in Guilden Morden. He married Emily O’DANIELS 1879 in St Barnabas, Pimlico. They had 3 sons, 1 dau, all born London. Charles was a soldier in the Grenadier Guard Pioneer Corps. He probably died 1893 Chesterton, Cambridge.

[1] All Guilden and Steeple Morden events have been checked in the Parish Registers, so references haven't been cited.

[3] Thanks to Andrew Pye for this information.

[6] Birth certificates of son and daughter

[12] Thanks to Andrew Pye for this information.

[30] Some information about this family came from Anne Simpson (AS) of New Zealand, granddaughter of eldest son Charles Frederick, from a Family Bible in her possession, and from her son; also from descendants of Bert and Florence.

[71] Birth certificate—Brooks not given as a name, just William

[73] Birth certificates of daughter and son

[113] Information on this branch was kindly supplied by Stanley and Edwin Brockett, Joan Fleming, Joan Cullen and others.

[118] Birth certificate of son and daughter

[120] Marriage certificate of daughters and son

[144] Most of the following details were kindly supplied by Bridget Howlett from newspaper cuttings in the DVD of the Lawson Thompson scrapbooks, held by North Hertfordshire Museum. See also Hine 1927-9 vol 2 p 431.

[194] Information on this branch was kindly supplied by Ian Ellis, John W Brockett and Leslie Parrish.