John was born by June 1485 as shown by his mention in the Will of his grandfather John Pulter. He was the son and heir of John of Wheathampstead, the first Broket Sheriff of Hertfordshire, but died before his father. His childhood would probably have been spent at Brockett Hall near Wheathampstead and his education culminated in London at the Middle Temple, admitted 5 Feb 1509 by William Bensted. John’s heir was later to marry Margaret BENSTED, most likely William’s daughter.

Nevertheless it’s convenient to call John ‘of Swaffham Bulbeck’ in Cambridgeshire if only to distinguish him from his father and his son, both of whom were called John, and were based in Hertfordshire. John came into property in Swaffham Bulbeck through his marriage, but how long the couple lived there is unknown. In a 1528 Common Pleas case brought after his death by his co-executors he was referred to as ‘John Broket of Swaffham Bulbeke’,1 although in the follow up answer in 1529 he was called ‘John Broket of Swaffham Bulbek otherwise called John Broket of London gentleman’.2 Maybe they had country and town residences. In his Will, although his first bequest was to the Vicar of the Parish Church of Swaffham Bulbek, he just called himself plain ‘John Brockett’. And in the 1634 Visitation of Hertfordshire, as the head of the Whethamstead dynasty, he was called “John Brockett of Brockett Hall in com. Hertf.” Only the 2 sons who remained in Hertfordshire were featured in that Visitation, the ones who removed to Essex and Suffolk were featured in Visitations of those counties, in the 1561 Suffolk one of which John was again called “of Brockett Hall, co. Hertf., Esq”, see the separate page.

1. Wife and children
2. Other records
3. Testament and Will

As heir to the Hertfordshire estates, John was married to a wealthy heiress: Dorothy d/o Nicolas HUGHSON Gentleman of Swaffham Bulbeck, a hamlet near Cambridge. The Visitations of Hertfordshire placed the couple at the head of their pedigree of the Wheathampstead dynasty:3

And this is a snip from the Tudor Dering pedigree showing “John Brokett marid with dorothe one of the ayres to husune and ham’ond” with her arms impaling Broket:4 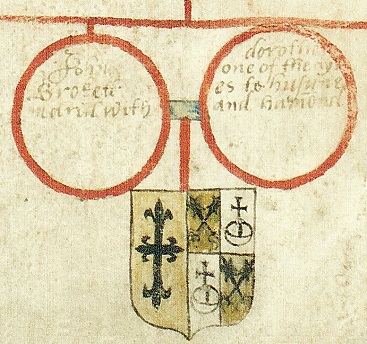 The marriage of their heir or heiresses was probably the most important strategic and political decision of the pre-modern landowner.5 Heirs usually did not have too much say in the choice; it was not normally a decision based on romance. As lord of the expanding Brockett estates, John’s father would for years have been on the lookout for a suitable alliance for his eldest son and heir, the dynasty’s future head. In the lesser gentry circles of the early 1500s, his heir was one of the most eligible bachelors of Hertfordshire. The match, negotiated by John and perhaps Lucy, indeed brought property to the dynasty, from the neighbouring county of Cambridgeshire, where Dorothy came from.

Dorothy’s father Nicolas Huson was educated and knew academics in Cambridge. In his Will he called himself ‘gentylmane’ and bequeathed properties in Cambridgeshire to Dorothy and John.6 However the case brought by Nicolas Hughson’s heirs against his widow Jane a few years later shows that he held manors in Kent and Surrey, and other lands in Cambridgeshire, one of them called Hamondes.7 Dorothy and her sisters’ 2 daughters were heiresses to substantial lands.

Contained in a Common Pleas action in Hilary 1526, after the death of John, husband of Dorothy is their previous marriage settlement:8+Read more

Over the years some scribes and copyists misspelt Dorothy’s surname as Huston or Hixon or the like. Perhaps because of these initial, minor variations, in some later pedigrees there is greater confusion. The Visitation of Essex—in its 1878 edition—gave her as ‘d. & heire to Hulse & Mamond’—Hulse looks like a corruption of Huson and Mamond of Hamondes, one of his landholdings:9

It is interesting to compare the Wills of the 4 sons: John, Nicholas, Edward and Robert.

John died 1526 in his early 40s, leaving his widow Dorothy to raise 8 or more children, the oldest of whom may only have been 13 or 14 at the time; she did the prudent thing and remarried within 2 years. A Common Pleas action of 27 Jan 1528/9 shows that John’s widow Dorothy had married Thomas RUDSTON by then. Thomas Rudston and Dorothy his wife executrix of the testament of John Broket of Swaffham Bulbeke, and coexecutor John Brokett Esq of Wheathampstead, his father, were suing William Nevile late of London esquire and Elizabeth his wife for a debt of 200 marks:19+Read more

The History of Parliament entry for Thomas Rudston recorded him as a Cambridgeshire JP from 1530 till his death in 1556 and MP in 1542, who “married 1st by 1528, Dorothy, prob. da. of Nicholas Hughson (?Hewson or Huston) and 2nd Anne FOWLER, daughter of William MORDAUNT, widow of Humphrey TORRELL and of one FOWLER; 2 sons. 4 daughters.20 and added:

“By a fine of 1540 Rudston had purchased land at Swaffham Bulbeck from his then or future brother-in-law Edmund Mordaunt (perhaps the contemporary at the Middle Temple of the Member of that name) and in 1549 he paid £100 to (Sir) John Brocket, probably also a kinsman, for a further 1,600 acres, the moiety of three manors and houses in Swaffham Bulbeck, Swaffham Prior and other villages in Cambridgeshire.”

The 1575 and 1619 Visitations of Cambridgeshire showed Thomas as son of William RUDSTON of the Isle of Ely, and father by his first wife [unanmed]—the daughter and coheir of Nic Hughston of Swaffham—of William Rudstone, and by his 2nd wife Anne d/o MORDAUNT of Hemsted Essex, of Thomas Rudston.21 This contradicts the History of Parliament account above, which said William was a son of his 2nd wife. Thomas was admitted to Gray’s Inn 1521, attorney by 1525, died Sep/Oct 1556.22 His Will dated 13 Sep 1556, proved 6 Nov 1556, left numerous legacies to friends and relatives, but no Brokets were mentioned.23 No PROB11 Will of his son William Rudston has been found.

1504-1515. A case brought by John Broket and Dorothy, his wife, and Dorothy and Jane Hildersham, daughters of Agnes Hildersham against Jane Hughson, late the wife of Nicholas Hughson, deceased, father of the said Dorothy Broket and Agnes.
Subject: Detention of deeds relating to the manors of Derbyes Court and Eversleys; two-thirds of the manor of Leatherhead: the manor of Burdons in the parishes of Borowe and Dullingham, and messuages and land in Swaffham Bulbeck, Bottisham, and elsewhere: Kent, Surrey, Cambridgeshire.24

In 1511 John purchased land with his father, younger brother and others in Bishops Hatfield, Willian and Diggeswell from Richard and Elizabeth Fyssher.25

1529-32: In a follow up Common Pleas action to that of 1528 above Thomas and Dorothy Rudston and John Brokett Esq of Wheathampstead were again suing for the debt of 200 marks:27   Read more

John’s Testament and Will

Translation of the Latin and summary of the English:
In the name of God Amen the sixteenth day of the month of February the year of the Lord one thousand 500 twenty four in the fifteenth year of the reign of Henry the eighth. I John Brockett my mind being sound and my memory healthy but sick in body construct my testament and last Will in this wise Firstly I give and bequeath my soul to God Almighty to the Blessed Virgin Mary and to all the saints and my body to be buried where the Lord most high shall please I bequeath for my mortuary as is the custom.
To the vicar of Swaffham Bulbek parish church 6s 8d.
To wife Dorothe £40 in money and goods, plus all the household stuff, i.e. brass, pewter, linen and hangings.
To Humfrey Bagshawe his servant 6s 8d.
To John Rolff 6s 8d.
To the Prior of Anglesey 6s 8d.
To the Nunnery or monastery of Deyne 13s 4d.30
The rest however of all my goods unbequeathed after my burial and other expenses paid I give and bequeath to my children to be divided equally between them and if any should die before reaching their lawful age then their share to be distributed among those living. And of this my testament and last will I ordain make and constitute my father John Brocket of Whethamsted and my wife Dorothy my true executors so that they shall order acting and disposing for the health of my soul as shall seem best to them to be done. Dated the day and year of the Lord mentioned above. By these witnesses Edward Brocket Gent Wlliam Skathe John Rolff and Arthur Chadwick priest and others.

John’s wife Dorothy and his father John Brocket of Wheathampstead were co-executors. Witness Edward Brocket Gent was his younger brother, later Edward of Letchworth. His servant Humfrey Bagshawe had been a witness to John’s father’s deed of feoffment of the manor of Thebridge in 1525.31 The probate recorded that Thomas Ridstone represented Dorothy at the court. She married him soon after.

John’s Will was brief, leaving legacies only to his wife and 5 non relatives. This could give the wrong first impression that he had no children nor indeed lands, but it was essentially a Testament rather than a Will, dealing only with his personal estate. See the similar Testament of John Brokett of Apylton, written 9 Apr 1472. “Theoretically land could not be bequeathed by a Will at that date, and such bequests fell foul of the laws of inheritance, which is why these early ‘wills’ were mostly charitable and personal bequests.”32 Also, although he was the heir to the extensive Broket lands, his father was still alive, so his Broket lands would still have been held by his father, and his lands held in right of his wife would have devolved back to her. This is probably also why no IPM exists for him. Unusually, the Will gave him no title like ‘Esq’.

[11] TNA CP 40/1135 (1 and 2 Edward VI). For the original Latin transcription and English translation contact the Archivist of this website.

[30] The bequests to the vicar, Prior and Nunnery are mentioned by Palmer, W M (1931) 'The Benedictine Nunnery of Swaffham Bulbeck', in Proceedings of the Cambridge Antiquarian Society, Oct 1928 - Oct 1930, Vol XXXI, Cambridge, p 55. With thanks to Andrew Pye for this reference, 3 Nov 2022.