Two separate but related Broket clans thrived in Willingale, near Chelmsford. Both clans began with a younger son who worked as an attorney at one of the Inns of Court in London. This second clan maintained close connections with London and younger children were usually Londoners.

The first clan sold its Willingale estate in 1634, but 54 years later it was bought back by a distant cousin. This second clan lived in Essex for over 2 centuries until 1906—albeit with 2 arrangements to preserve the name when the patriline died out.

Much more is known about the second Willingale Brocket clan:

Memorials to generations of the clan from its 2nd century dominate the little church of St Andrews and All Saints in Willingale, suggesting how they dominated the life of the little village for 200 years.

John I was born 1649 in London, a younger son of a Charles Brockett, Citizen and Fishmonger of London. John I was admitted to the Middle Temple in 1672. According to his daughters he was ‘by profession an Attorney but chiefly followed the practice of a Solicitor in the Court of Chancery‘.1 Being an Attorney was one of the fastest ways to make money in late 17th- and early 18th-century Britain and many of those trained at one of the Inns of Court were able to retire to a rural property purchased from the profits of their business.2 This applied to John who became known as both Gent and Esq. In 1688 he bought the Manor of Torrells Hall followed by the Manor of Willingale Spain in 1698. He died in or about June 17043 aged c 55.

On 4 Apr the year that he was admitted to the Middle Temple he was married at the Temple Church to Sarah dau of John HERNE Gent of Cliffords Inn, an Inn of Chancery. The 1860 Gateshead pedigree describes Sarah as his heiress. No records of her father have yet been found, but she would have brought wealth to the marriage. Her sister, married to a Mr Spyre, died a wealthy woman. Her estate passed to John I in 1700 as executor and residuary legatee and was valued at £1500.4 £300 of it had been left to her sister Sarah, John’s wife, and it is a sign of the times that John did not pass this to his wife except through his Will.5 Their children also each received legacies from Aunt Spyre—except Penelope and Richard who alledgedly never received theirs from William I, John I’s executor.6 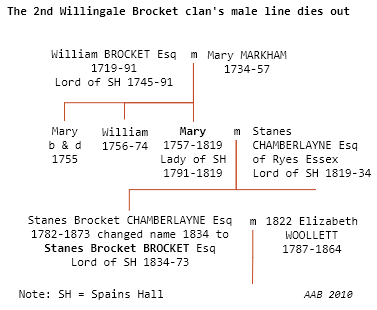 William II Esq 1719-91 had a long career at the Middle Temple: admitted 1738, called to the bar 1742-3, Bencher 1778, Reader 1785 and Treasurer 1790. His only son died unmarried aged 18 but his daughter Mary married Stanes CHAMBERLAYNE Esq and had children including a son Stanes Brocket CHAMBERLAYNE. William’s Will was long and principally concerned to preserve the Brockett name.9 Consequently his grandson became Stanes Brocket Brocket, as follows.

For the 1841 census Stanes, aged 18, was living by independent means in the house of George Seddon, Merchant, 75 Guildford St, St Pancras, London—name mistranscribed as Staione Brochet, and the other children were with Mary HUGHWAY, 55, Independent, and 5 servants in High St, Rye, Sussex: Elizabeth, 16; William, 15; Mary 13; Thermuthis, 12—all born in the county except Mary.

Below are the names on the memorials in St. Andrews Church, Willingale Spain. They belong to the second clan after 1755 only. At least one other Brocket had been buried there previously—William Esq who died 1745 having requested to be buried underneath the family pew. Members of the first clan may also have been buried here too.

On the wall behind the pulpit in the nave:

On the south wall of the nave: