Watton at Stone was some 8 m NW of Wheathampstead, and John had various dealings with Sir John Brokett I. Like him he was on various commissions in Hertfordshire 1551-68. He also would have known Edward Brokett of Letchworth who was Sheriff of Essex and Herts two years before John. They both had to officiate at the burning of heretics, for which John’s expenses claim has been found. Here is John’s signature from another expenses claim he submitted with Sir John Brokett I during the reign of Edward VI (1547-53):1

Officiating at the burning of heretics

At the top of the relevant bundle of Sheriffs’ Accounts and Petitions in the National Archives are two documents:2

Philip & Mary by the grace of God king and queen of England, the Spains, France, both Sicilies, Jerusalem and Ireland, defenders of the faith, archdukes of Austria, dukes of Burgundy, Milan and Brabant, counts of Hapsburg, Flanders and Tyrol, to the sheriff of Essex: greeting. Whereas the Reverend father in Christ, Edmund by divine permission bishop of London, by his definitive sentence has pronounced and declared Rose Allen, Margaret Thurstone, John Johnson alias Alyker, William Monte and Alice Monte and each of them, on account of their various damned and manifest errors and heresies, as well as their damnable opinions contrary to the Catholic faith and the sacrosant Mother Church, taught, held, preached and affirmed by them (and which errors and damned heresies and very bad opinions contrary to the Catholic faith as aforesaid, personally appearing before the said Reverend father, they have continued in and by some sort of obstinacy have completely sustained and defended, and they have asserted and affirmed that they are willing to hold and defend them to the death) to be manifest heretics, and decreed them to be left to our secular power, and has in fact left them, according to the laws and canonical sanctions issued in this behalf. And whereas the Mother Church can do no more in the premises, we, zealous for justice and defenders of the Catholic faith, wishing to maintain and defend Holy Church and the rights and liberties of the same, and so far as is in our power to root out and destroy suchlike heresies and errors, and that heretics so convicted should be punished by condign chastisement, and understanding that suchlike heretics convicted and condemned in form aforesaid according to the laws and customs of our realm of England accustomed in this behalf should be burnt; we ordered you to commit to the flames the said Rose, Margaret, John, William Monte and Alice Monte and each of them, being in your custody, in a public and open place within the liberty of the town of Colchester before the people, for the reason aforesaid, and thou shalt really cause the said Rose, Margaret, John, William and Alice and each of them to be burnt in the same fire, in detestation of such a crime, and as a manifest example to other Christians; and you shall in no way omit this, under the pain incumbent, and as you will wish to answer to us thereupon. Given by us ourselves at Richmonde, the 29th day of July in the 4th and 5th years of our reigns
Marten
For an image of the writ4 click here.

2. John’s expenses claim of £9 2s 8d for bringing the heretics from London and supervising their executions:

England’s official religion under Queen Mary had reverted to Catholicism and many Protestants were burned at the stake during her reign. Like Edward Brokett of Letchworth before him, during his tenure as Sheriff of Essex and Herts 1556-7, John had to officiate at at least one such burning. As representatives of the Crown Sheriffs up and down the country were presiding at fires of execution. It was the ecclesiastical authorities, notably Edmund Bonner Bishop of London, who examined suspects and condemned them to death; Sheriffs were the secular authorities at the end of the process carrying out the royal commands.

In his biography of John for the History of Parliament, Coros said: “Nothing is known of Butler’s religious views. His Membership of Mary’s first Parliament implies that he was a reliable servant of the new regime, but he served continuously on the Hertfordshire bench under Edward VI, Mary and Elizabeth. When, in August 1557 his under sheriff unlawfully reprieved a heretic who was to be burnt in Colchester, Butler was fined £10 by the Privy Council.”5 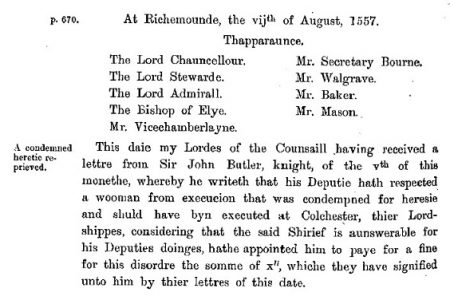 Foxe graphically recounted the stories and the burning on the afternoon of 2 Aug 1557 by the “sheriff of the shire” of William Mount of Much Bentley, Essex, aged 61, his wife Alice, aged 41, and her daughter Rose Allin, aged 20, John Johnson alias Aliker of Thorpe, aged 34.6 John Thurston and his wife Margaret had been found in the Mount’s house and taken likewise to Colchester Castle, but John died there before his execution.7 Foxe didn’t mention Margaret’s burning; she was probably the one reprieved by Butler’s under sheriff.

[4] Reproduced by kind permission of the National Archives licensed under the Open Government Licence v3.0.