Son of Nicholas Esq and Margaret HOO, John grew up at Mackery End House1 as the only child of the Manor. He held it all his life.

The main structure of the house today is still Elizabethan, and the tulip tree in the gardens—originally one of a pair—was planted at that time and is now one of the finest in the country.”2 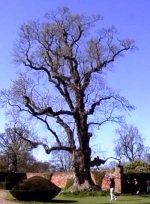 Some time after 1585 John erected the memorial on the wall of the north transept in Wheathampstead Church in memory of John Heyworth, who had adopted John’s mother as his heir.

After being knighted 1599 in Ireland Sir John Brockett began a military career there as Commander of the Fort of Duncannon. But allegations of counterfeiting coins there—whether true or false—cut it short before 1606. His life ended in obscurity compared to the first and second Sir Johns—no Will or IPM has been found.—and his male line apparently died out. John was baptised in St Helen’s Wheathampstead Jan 14 1562 and buried there 20 Sep 1613 aged about 51.3 His arms were recorded in Burke’s General Armory, but there was no memorial to him in the Church. Recorders of the Wheathampstead dynasty did not refer to him as Sir, nor therefore the 1860 Gateshead Pedigree. Glover, Clutterbuck and Berry did not even include him on their pedigrees.

Married Mary, daughter of Thomas SNAGG, a Sergeant at Law—the highest rank of barrister.4 Thomas SNAGG was Speaker of the House in 1589.5 John and Mary had four children:

1601 23 Jun: First mention as Warden of Duncannon Castle,14 in charge of a lieutenant, a canonier and 30 warders. This year a William Brockett carried letters from the Privy Council to Sussex to muster horsemen to fight the Spanish army which had landed in the South of Ireland.

1601: John wrote various letters to Secretary Cecil concerning, among other things, movement of coin out of southern Ireland.15 This one from Dublin on 23 June 1601 is in his own hand with his signature.16 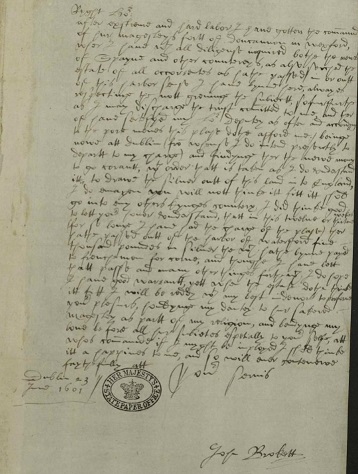 “After extreme labour he has got the command of Duncannon fort in Wexford. Has diligently enquired into the news of Spain and other countries, and searched the estate of all occurrents in the harbour, and has certified the Lord Deputy thereof. Is now in Dublin, whence he intends presently to depart to his charge. Finds the new money is current there, and that order is taken to draw the silver out of Ireland into England. Imagines that Sir Robert will not think it fit that it should go into any other King’s country. “In this twelve or thirteen weeks (for so long I have had the charge of the place), there hath passed out of the harbour of Waterford five thousand pounds in silver, the which hath been paid to Frenchmen for corn, and though I have let that pass, and many other things, for the which I do hope I have good warrant, yet, when the Estate doth think it fit, I will be ready with my best endeavours to perform your pleasures.”

1602 23 Dec: Sir George Carew to Secretary Cecil, “…I recommend Brocket strongly… I think that he has been wronged…”17

1603 5 Apr: Sir John was interrogated about various events surrounding the alledged counterfeiting of coins in Duncannon Fort. For example, why did he imprison two goldsmiths in the fort? How did he come to have certain instruments in his desk? Did he melt divers Spanish pieces?18 Son John, Lieutenant, was implicated but not younger son Thomas.19

1605: After this year Sir John was no longer in command of the Fort of Duncannon.

1588 John Brockett of Mackerells End is said to have received £1100 for the sale of the lease of the Manor of Totteridge to Richard Pecock of Fynchold, Middlesex. But John was not the true owner according to a suit brought by Richard Pecock.20

1598 Bearer of one of the 2 standards at the heraldic funeral of Sir John II in St Etheldreda’s Hatfield.

Between 1609-1613, during Sir Thos Smyth’s treasurership, John invested in the Virginia Company and acquired land in Virginia. By 1613 at the latest it was owned by his son John.21

[1] Image of his signature above from TNA SP 63/208/3 f102, letter of Sir John Brokett to Sir Robert Cecil, dated June 23 1601. Reproduced by kind permission of the National Archives licensed under the Open Government Licence v3.0. Image below taken from 'Wheathampstead with Harpenden: Manors', in A History of the County of Hertford: Volume 2, ed. William Page (London, 1908), pp. 297-309. British History Online: goo.gl/XwgNij 24 October 2017.

[2] goo.gl/8jBLtW (accessed 14 Oct 2017) Thanks to www.wheathampstead.net for giving permission to reproduce it here.