The Croft - The Broket Archive

Broket property in Bancroft
and elsewhere in Hitchin

In 1538—the 30th year of the reign of Henry VIII—Willyam Brokett of Hitchin town purchased a mansion house similar to this one from a Gentleman of the king’s household for “threescore and fyue poundes of good and lawfull money of Englande”, £65:1
+++ 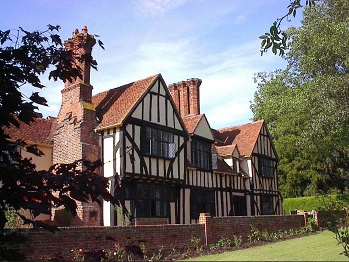 “In Bancroft or Bancroft Street, at the north end of the market-place, are many old houses. On the west side is a house now known as the Croft, which was built early in the 15th century, although since much altered, and was occupied until recently by the Tuke family.” 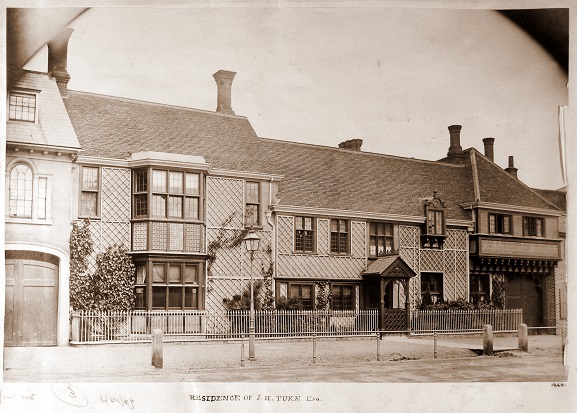 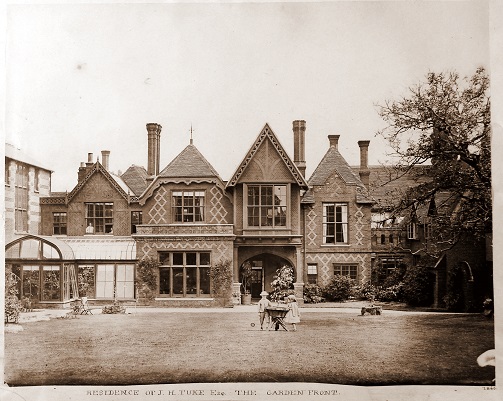 The Croft is now designated 11, Bancroft, and in 2019 the frontage still looks similar to the 1866–and earlier—frontage. However it is a 1964 pastiche replica:

“It is a reproduction of the former facade with the shops inserted in the ground floor. In fact Hitchin Property Trust and their architect Hugh D Bidwell maintained that it was not practical to use the existing building and applied for a demolition order and replacement with shops and offices over plus a four story block of flats behind. In 1960 Hitchin Urban District Council declared that the existing front elevation should be preserved and The Ministry of Housing and Local Development dismissed the proposed new development as unsympathetic in December 1961. Eventually HUDC Town Planning and Development Committee decided that the applicant could demolish the existing building due to its poor construction and absence of proper foundations, but reconstruct a replica in 1964.”3

The following records document the successive stages in the ownership of a large freehold property in Bancroft Street, called by the 19th C at least ‘The Croft’, for instance by James Hack Tuke, the owner at the time of the photographs above. The earliest right down to the latest records concern a large freehold property, the attached garden being described in 1556 as “one and a half burgages”. Hey defined a burgage plot as “The property owned by a burgess in a medieval town” and a burgess as “1. A citizen or freeman of a borough, especially a member of the governing body of a town.”4

1. William’s purchase of the Bancroft property was enrolled in a Close Roll dated 17 May 1538. He bought it from Henry CHRUCH, “of the kyngs howsolde gentilmane and baylye of the Towne of hechyne” for £65.5 The bailey or bailiff was an important public official, like a mayor or the agent of the lord of the manor—in the case of Hitchin the Queen.6 A summary of the Bargain and Sale held in HALS describes the premises as: “Tenement and messuage with garden adjoining in Bancroft Street between the house of William Chambers late Thomas Huntlowe’s on north and houses belonging to the brotherhood of Our Lady on the other part and a toft lying in Charlton in the parish of Hitchin with 30 acres of free land being severally in the fields of Hitchin, Ipolletts and the hamlets of Charlton and Dynesley Furnival. All the above premises were bought by the said Henry Church of one Thomas Huntlowe of London haberdasher and were sometime in the possession of Thomas Abbott of Hitchin aforesaid.”7 This was probably the Thomas Abbott, Mercer, memorial inscription oin Hitchin Church.

2. The next reference to the property is in the 1556 survey of the Manor of Hitchin: “William Brockett held freely one and a half burgages in Bancroftstreate once Abbotts for 23d a year”. Although it was freehold, it was usual for freehold property to pay a fixed annual quit rent to the Lord of the Manor.8

3. A contemporary document soon after his death in 1556 called it “his mansion house”.9

5. William III and his wife Katherine Hanscombe would have occupied the house all their married life. When the house was demolished in 1964/5 the couple’s combined initials ‘WKB 1600’ were found carved into a fireplace in what was then the library.11

6. Soon after the death of William III in 1623 his eldest son and heir Edward Brockett III of Hitchin began to sell the family property in Hitchin. In 1630-1 he and his wife signed 3 deeds of covenant to levy fines for a capital messuage in Bancroft Street, Hitchin, and 41½ acres of land in Hitchin and St Ippollitts “which premises were sometime the land and tenements of William Brockett late of Hitchin yeoman deceased, father of the said Edward. “12 The purchasers were Andrew SEWERTYE of Hitchin, Gent and Thomas SEWERTYE of Hitchin, Maltster.

7. Sale by Thomas and Sarah Suerties in 1640. Information on this sale and subsequent sales of the property up to the modern day was kindly supplied by Bridget Howlett, historian of Hitchin, on 20 Feb 2016, as follows:

I have made some progress in locating properties in Bancroft. I now believe that William Brokett’s one and a half burgages in Bancroft were the house known in the 19th century as The Croft. It is now shops (My Local, Costa Coffee, and part of The Garden Hospice Shop, 11-12 Bancroft) with Croft Chambers above. This is a large plot as befits one and a half burgages and very central on the west side of Bancroft just north of the junction with Brand Street.
+++
The crucial link was a fine amongst the Wilshere Papers at HALS recording the sale in 1640 by Thomas Suerties and Sarah his wife to Tristram Hurst of a messuage, garden and orchard in Hitchin.13 As normal in fines, it gives no more indication of the location of the property, but it is endorsed on the back ‘Bancroft Street’. It appears to be the earliest in a series of deeds relating to The Croft amongst the Wilshere Papers.
+++
In 1648 Tristram Hurst sold the house to William Lucas. Both are described as yeomen. William Lucas also bought a little malthouse behind the house next door to the north.
+++
In 1676 the messuage was held by Anne Lucas widow who significantly paid an annual rent of 1s 11d to the Lord of the Manor, the same rent paid by William Brokett.

“Anne Lucas, widow, mother of the same William [Lucas of Bancroft, the elder] holds freely of the lady of this manor one messuage in Bancroft with outhouses, buildings, yards and appurtenances belonging to the same for the term of the life of Anne herself with remainder to William and his heirs, being once the house of Tristram Hurst, afterwards of the aforesaid William Lucas, deceased and now in the tenure of the aforesaid William now holding by fealty, suit to the court and she pays 1s 11d per annum.14
+++

In 1691 Anne’s son, William Lucas the elder and other relatives, sold the capital messuage including maltings and kilns to William Ireland. It was inherited by his son, John Ireland, gentleman, who lived there for many years. His heir was his daughter, Elizabeth, who had married John Simpson, a maltster. Their sons both died young so on Elizabeth Simpson’s death in 1795, she left all her property in Hitchin to her friend and kinsman, William Wilshere the elder, for his life, then to his younger son, Thomas. In 1818 the house was owned and occupied by Thomas Wilshere. (HALS 57624-57626, 57650, 57953, 57975, DE/Ha/T111, Survey of Royal Manor of Hitchin 1676 p.73; Hitchin Museum 1818 map of Hitchin)
+++
Thomas’ elder brother, William Wilshere, was an extremely wealthy and influential Hitchin lawyer, Lord of the Manor of Great Wymondley, friend of Samuel Whitbread the younger, partner in the Whitbread brewery and founder of the Hitchin British Schools. He lived in a large house on the other side of Bancroft called The Hermitage. As he had no children, his heir was his nephew, his brother Thomas’ elder son, another William. Thomas’ younger son, Charles Willes Wilshere inherited The Croft but by 1859 he had sold it to James Hack Tuke, a Quaker banker from York. One of his daughters was Dame Margaret Tuke, Principal of Bedford College.
+++
The Croft was much altered and modernised in the 19th and 20th centuries and is not listed. In his History of Hertfordshire published 1870-1881, Cussans stated that when alterations to The Croft were made by Charles Wilshere a few years ago it could be clearly seen that the house from ground to roof constituted but one large hall, richly ornamented with carving throughout its entire height.

The crucial link in the chain was the 1640 sale  with its endorsement on the back of ‘Bancroft Street’. This was further supported by the same figure of 1s 11d in rent in 1676 as in 1556. The rent had typically remained stable over 120 years, and is evidence that the two records were of the same property.

[1] TNA C 54/416. Many thanks to Dr David Andrews for studying pictures of the architectural features of of the Croft in Hitchin and likening it to this one in Terling and for kindly permitting the image to be reproduced here. Dr Andrews is an expert on old buildings who worked for Essex County Council as an archaeologist and historic buildings adviser for 25 years, becoming Historic Buildings Manager from 2006 to 2012. His and B Watkin's article 'Terling, Tudor House' was first published in Essex Archaeology and History 28, (1997), 240-241.

[8] TNA E 315/391. Many thanks to Bridget Howlett for this reference and information