the court case - The Broket Archive

William Brockett of Hitchin’s executors, Robert Nycoll Citizen and Merchant Tailor of London and John Gaddesdon of Hitchin, first brought this case to Chancery around 1559 demanding Edward Brockett, eldest son of Edward Brockett of Letchworth Esq, settle a debt of £130 he owed William.1 It concluded with a final decree issued in 30 Jan 15652 ordering Edward to pay the complainants £90 in instalments. It was probably never paid. Within a few years Edward was an outlaw, having been pursued by two other Nicolls.

This is the C78 Decree Roll open at the judgment:3 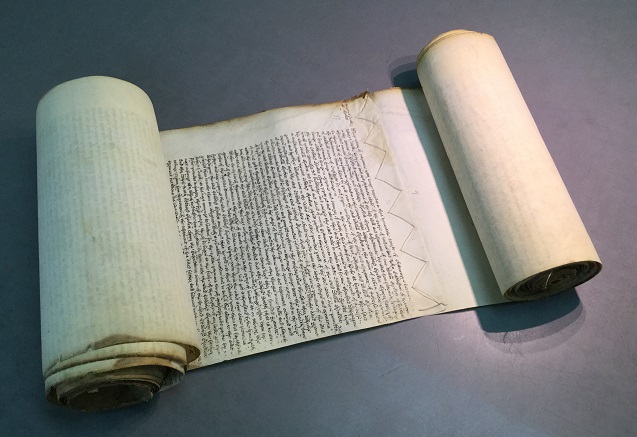 Thereafter the hearings are recorded on paper in TNA C33, concluding with the judgment in TNA C33/31/81.4

The bill of complaint is the uppermost of the four parchments and has been subject to light and rough handling, and so has faded and been damaged down the right hand edge and bottom, where the ink has mostly gone. The document was studied for five hours by means of ultra-violet light, which brought out much that was illegible to the naked eye in these areas, but where the ink had completely gone nothing could be deciphered. These unreadable parts are represented by […] in the transcript below, some being several words and others only parts of words. Where words can be safely guessed from the context they are added inside the square brackets. Much of the Complaint was reproduced in the enrolled judgment so fill-ins can be cross checked, see below. The other three parchments have only suffered creasing and are fully legible. Here is a full transcript: +Read more

Coros saw this C3/132/103 document in the late 1970s when it may well have been less damaged or faded. Coros’ statement: “The executors of a relative, William Brocket, were to sue Edward Brocket the younger in Chancery for an alleged debt…” may have been based on words in the Complaint which are now illegible. But even if not, Coros was in no doubt that the two men were related, presumably as an obvious interpretation of the circumstances.

A summary of the main points

Edward jnr’s Answer is essentially a bare denial. He admits to knowing that Edward snr:

However he denies any knowledge of the monetary value involved in this land deal with William and claims the complainants’ case is fabricated. Edward jnr alludes to an agreement made soon after Edward snr’s death between himself and his brothers William and John whereby he undertakes to pay ‘certain sums’ to settle Edward snr’s debt and thereby release William and John from their duty as Edward snr’s executors. Under this agreement he will settle the debt within a number of years. It is a fact that he pays the complainants £20 (why he did so is at issue). Edward jnr admits that because of this agreement with his brothers, he paid £20 to the complainants but he denies that in so paying he had undertaken to settle Edward snr’s entire debt with William. He also denies that he was privy to the agreement made by Edward snr.

The Crux of the Matter

The question is: Why did Edward jnr pay the complainants the £20? Was it because:

The Complainants say it was the former, Edward jnr says the latter. As he neither explains the scope of his agreement with his brothers nor does he have his brothers corroborate his story, the assumption must be that Edward is not being entirely truthful in his Answer.

In his Rejoinder, Edward jnr merely repeats and stands by his earlier Answer. There is no infusion of any supporting evidence. He again denies that the agreement between him and his brothers is for the settlement of all his father’s debts as alleged by the complainants.

He now raises the legal issue of the complainants’ right in law, not being the executors of Edward snr’s estate, to bring this action (Bill of Complaint) against him. He questions whether the complaints have sufficient privity of contract to give them locus (standing) in the Court on this matter?

The Judgment further orders the Complainants to be similarly bound to Edward jnr for 200 marks. They are to indemnify him and keep him indemnified against all other persons who might lawfully claim any part of the £90 from him. They are to release the £90 to such persons as are entitled to it under William snr’s Will and if they fail to do so, their surety will settle 200 marks on Edward jnr.

It appears that the Court recognised a sum owing of £90 only. By ordering Edward jnr to pay the Complainants the Court is recognising that when he paid £20 to the Complainants, he undertook to settle all sums owing by Edward snr. To make certain that he does pay this sum they order that he or a surety pays £133+ (200 marks) if he reneges on this payment.

But the Court also wanted to ensure that Edward jnr was not burdened by additional claims, so it ordered that with the receipt of the £90 the Complainants now must ‘protect’ (indemnify) Edward against any subsequent claims on the same debt of £90.

So if a 3rd party now claimed an entitlement to the £90 or any part of it, the 3rd party would have to recover it from the Complainants and William’s estate. If they refused to protect Edward jnr they would have to pay to him 200 marks and if they failed to do this their surety would have to do so.

William’s first-named executor, Robert Nicholl / Nycolles, was a citizen and Merchant Tailor of London, and probable master of William’s son William, his apprentice. When he died has not yet been discovered, but it was possibly before Edward Brockett’s debt to William had been recovered, since two other Nicolls were pursuing Edward Brockett in court for debt.

A search in the PCC Indexes for an Administration for Robert Nicholls after 1559 was unsuccessful.12 The following two seem too late:13

[3] Reproduced by kind permission of the National Archives licensed under the Open Government Licence v3.0.

[5] Numbers have been given to the lines for ease of reference.

[7] Grateful acknowledgements to Advocate Richard Brockett for his comments on this interpretation.

[8] Numbers have been given to the lines for ease of reference.