Huntingdonshire lies NE of Bedfordshire, W of Cambridgeshire and SE of Northamptonshire. Apart from a 16th C Gentleman son of Edward of Letchworth, who held land in Stow Longa, Huntingdonshire, Brokets settled in the town of St Neots in the 17-18th C and in the village of Kimbolton from c 1816-1913. There were also a couple of isolated records further north in Sawtry in the 19th C. Those in St Neots were most likely a branch of the Bedfordshire Dunton clan and after 4 generations died out or moved on, and those in Kimbolton were part of the separate Bedfordshire Grouping, and after 3 generations moved to Lincolnshire where they evolved into a large clan with members still living there and elsewhere.

The St Neots line survived through 4 generations from the 1670s to the 1740s, beginning with Samuel and Mary, or perhaps just Mary. Mary was in St Neots at least by 1684—when she was excommunicated—and she died there, a Widow, in 1701. It isn’t known if Samuel had lived in St Neots. The couple had had their two daughters baptised c 2 m S in Little Barford 1653-5, so they were in the vicinity from the middle of the century. Their son married in St Neots in 1673 as a Butcher and presumably therefore had been there some time by then. Mary’s modest—but signed—will and the signed application for a marriage licence by her son indicate that this Broket line occupied a middling rank in local society. The eldest sons were Butchers—neither wealthy Yeomen nor Labourers. This, and the correlation of names and dates, make it virtually certain that they were a Dunton cadet line, descending from Samuel, 5th son of Edward II and Ann NEGUS: 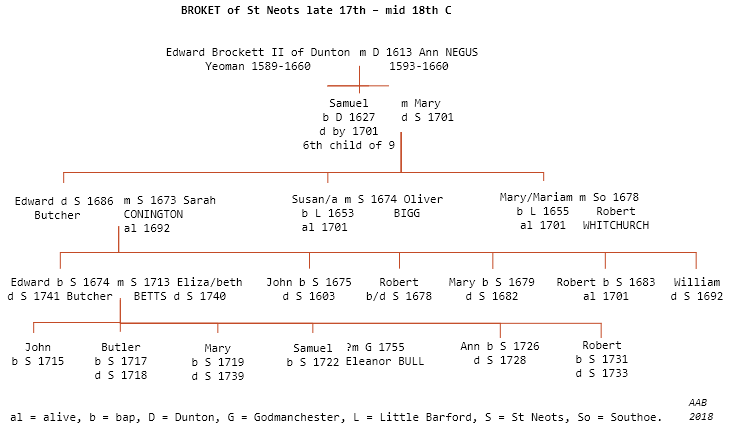 No further records have been found of Robert son of Edward and Sarah, still alive in 1701, nor of John son of Edward and Eliza nor his brother Samuel, probably alive 1755. Other known contemporary Samuel Brokets:

On 7 Jul 1673 Edward Brockett and Joseph ABBOTT, both Butchers of St Neots, each pledged £200 to secure a licence from the Archdeacon for Edward to marry Sarah CONINGTON, also of St Neots. The Bond is the only Broket entry in the Marriage Allegations and Bonds Index 1663-1883. The Latin bond—a printed proforma with spaces to write in names and dates—is almost identical to John son of John of Caswell’s from 1635. The wording of the English condition—also a printed proforma—is slightly different. Edward signed—his parents had sent him to school. Marriage licences, especially for marriage in one’s own church, were a socially up-market alternative to Banns, which some perceived as a little vulgar.

The 3 volumes of the Hunts Marriage Index span 1601-1837 and have the following 8 Broket entries.19 The first 4 all belong to the St Neots line and the second 4 to the later Kimbolton and Souldrop clans:

She was most probably the wife of a Dunton Broket, and ancestress of the St Neots line which survived through to the mid 18th C. She died there 1701, leaving a Will.

1. In the Name of God Amen: the two and twentieth day of
2. August in the yeare of our lord 1700: I Mary Brocket of St Neotts
3. Widow being of a sound and perfect Memory praised be god   Read more
4. for the same And being desirous to setle that worldly estate
5. the lord in mercye hath lent me: do make this my last will
6. and testament firstly I Commend my Soule to almighty
7. god, hopeing for mercy through my redemer the lord Jesus
8. And my body to the dust to be buried in such a decent
9. Manner as my executour after Named shall iugde [sic] Meat
10. and do revoke and make void all former wills by mee
11. made either in word or deed, And make this my last
12. will and testament in Manner Following
13. Imprimos
14. I giue and bequeath unto my grand son Edward Brocket one
15. Shilling after my decease: I giue to my grand son Robert Brocket
16. one pound to be paid three months after my decease: I giue to my
17. daughter in law Sarah Brocket Widow Fifty Shillings to be
18. paid her six pence a weeke. till the whole Sum of Fifty Shillings
19. be paid and in case the said Sarah Brocket should dye before the
20. receiuing of the said legacy then the remainder to be giuen to
21. Robert Brocket. I giue to my daughter Mary Whitchurch wife
22. of Robert Whitchurch the Sum of Thirty pounds to be paid
23. in Six Months after my decease: And I ordaine make constitute
24. my daughter Susanna Bigg wife of Oliuer Bigg of St Neots
25. aforesaid Sole executrix of all my goods and Chattels and of all
26. monies due to me: she paying my debts and legacies and all
27. other Charges: In Witness whereof I haue herevnto set my
28. hand and seale the day and Yeare aboue written:”
29. published and declared to be the last
30. will and Testament of Mary Brocket
31. in the presence of John Luke Ra. Luke Jeane Holmes her marke
[signed] Mary Brockett [seal]Proved 30 Oct 1701 by Susanna Briggs.22

Signed by Mary in a very shaky hand.

Sawtry is c 16 m N of St Neots on the main north road.

The Indexed Transcript of Parish Registers 1604-1886 has no Broket baptisms or marriages, only 1 burial: 7 Nov 1826 Ann23 Brockett, aged 58, ie b c 1768. She may have been a Broket by marriage, but it isn’t clear who she was. Ann didn’t leave a Will or administration among the Huntingdon Archdeaconry probate records.

The Burial Register 1813-184824 also has only 1 burial: 18 Apr 1831 William Brocket of this parish, aged 73, ie b c 1758—mistranscribed as Brochet in the draft transcript. William didn’t leave a Will or administration among the Huntingdon Archdeaconry probate records. His parentage isn’t obvious.

[22] The will clearly names Susanna Bigg as executrix and the probate Susanna Briggs.