Contents of this Page:

This was the century of the Great Fire of London—1666—preceded by a visitation of the Plague in 1665 in which thousands died. A new city rose from the ashes and with a population of over 500,000 was Europe’s largest and most cosmopolitan city. Not long before many had lost their lives in the Civil War 1642-6 and then in the following Commonwealth 1649-60 many records were lost or not kept.

The origins of several 17th C London Brokets are still unaccounted for, but records show that many came from the by-then indigenous Southwark clan, or immigrated from Hertfordshire branches. Some younger sons inevitably became poorer.

Alexander Brocket Merchant of Antwerp, Flanders, was freed from Southwark jail in London 3 Oct 1643 on condition “forthwith to depart this kingdom and … not to return without license of the Governor of Dover Castle.” Further details here.

Bernard of Faringdon Without 1633

Son of John of Wheathampstead Esq and Mary Garroway. Married Anne BRISTOW. Will proved PCC 11 Feb 1662/3, executors brother Thomas and kinsman Edmond Brockett and Mr William Rolfe.4 Inventory of the goods and chattells of Charles Gent of Westminster 1663.5 He had a contemporary namesake kinsman in London: Charles, a Fishmonger, see next.

No Will has been found for Charles, neither baptism, marriage nor burial record. However, he must have been the Charles left a bequest, as a son, in the Will of John Brokkett of Codicote Herts Gent, written 9 Feb 1648/9, see the separate page. The 1860 Gateshead Pedigree—‘The GP’ for short below, and based in this its lower section largely on Spains Hall manuscripts—had him as a son of that John. He appears to have scarcely lived to his 40s. Fishmonger Company records support this and provide other information, as follows:

Charles had a contemporary namesake kinsman in London: Charles, Gent, see above. He died before 1660, the year his widow Joane apprenticed their son Charles to herself.10 “Jone Brocket widow” who was buried 12 Jun 1687 in St Sepulchre, Holborn, City of London—the parish of many of her children—was most probably Charles’ widow.11 Baptismal records have not so far been found for any of the family. The sources for the names, dates and other brief details of Charles and Joan and their 5 children in the GP aren’t known—probably manuscripts from Spains Hall—but they fit well with other records found, as follows:

Son of John of Caswell Esq. Merchant Taylor. The Merchant Taylor’s Company27 recorded Edmond being presented 4 Apr 1646 and freed 4 May 1653, by master Thomas Pendleton. Freedom usually coincided with the age of 21, but Edmond was 28. The only other known contemporary Edmund was the son of Edmund, Vicar of Luton, bap 1605—too early to have been an apprentice 1646-53.

Edmond died of the plague in 1665 in London in difficult financial circumstances and a dispute arose over the execution of his Will28 between his widow Judith (d 1688) and the executor, kinsman Thomas Brockett in 1665.29 John and Richard Hare were among the defendants. A Richard Hare snr witnesssed the writing of Thomas’ Will in 1664. 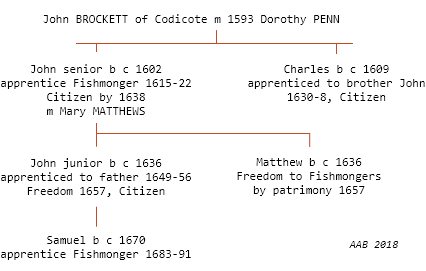 The following children of John Brocket, Fishmonger, and wife Mary were recorded in the Registers of St Nicholas Cole Abbey, Old Fish St:35

John would have been son of John and Mary MATTHEWS above. No marriage for him and Mary was found in the Registers of St Nicholas Cole 1650-63. Burials were searched in the Registers from 1660 through 25 Apr 1695—the end of book—but the only similar one found was for a John Brocha in 1684. St Nicholas Cole Abbey was destroyed in the Great Fire 1666.

John Brocket of Stepney Middlesex Mariner had invested in a ship bound for the West Indies searching for wrecks.36 It arrived Jamaica Aug 1688 where the Captain took 54 men on board when only 22 were the complement and set up as a Privateer. Not to be confused with John Brockett of Stepney, Mariner, who wrote his Will 28 Jan 1708, proved 27 Mar 1723/4 by John Brocket of the Middle Temple Esq, presumably a cousin, see the separate page.

Annis’ connection with Shingey in Cambridgeshire, see below, might suggest the last, but her property and London residence would suggest one of the others. In fact, the following evidence leaves little doubt that John was the son of John and Mary of St Nicholas Cole Abbey above, baptised 1660.

5. … I Annis Brockett
6. of the Parish of St. Paul Shadwell in the County of Middlesex Widow Read more

Her children were still minors,38 therefore the eldest was born after 17 June 1680 and Annis probably married John after 1680. It’s clear that she and John married in St Paul Shadwell, Tower Hamlets, 28 Feb 1686/7: “John Brockett of this parish singleman and Annis Osland of the same Singlewoman by License”.39 A record of this 26 Feb 1686/7 marriage by licence in Canterbury Kent gave Annis’ father as John Osland.40 It also gave John’s age as 26, i.e. b c 1660/1. Soon after ?? marrying John made his Will, as he was also about to depart on a dangerous journey: Since Annis was pregnant with Mary in mid June 1701 and gave birth to her on 28 July, John would presumably have still been alive in January or February at the latest. His Will was proved 15 Apr 1701, but a burial record hasn’t so far been found. It wasn’t recorded in the St Paul Shadwell register. Similarly, Annis was alive for Mary’s birth on 28 July 1701 and her Will was proved 15 Apr 1701, but a burial record hasn’t been found in the St Paul Shadwell register. “Anne the wife of John Brocket [who] was buried the 4th [May] 1700” in St James Clerkenwell was clearly a different Anne,41 but it shows that John and Annis of Shadwell weren’t the only John and Ann London Broket couple at that time. John and Annis’ children:

Joseph married 1st 11 Nov 1628 Mary daughter of William SMITH, Mercer of Stratford-upon-Avon; bequeathed 20s for a ring in the Will of Rose Raysing of St Bride’s London.58 Their children:

Widow of Edmond. Will written 9 Jan 1687/8, proved 20 Jan 1687/8, executrix Judith Roberts.69 A very large parchment of several pages records a dispute over the execution of Edmond’s Will between Judith and the executor, kinsman Thomas Brockett.70

Nicholas and Anne/Agnes of St Dunstan Stepney 1620s and 30s

With little doubt this was Nicholas, b c 1593 Lincolnshire and styled ‘of Shadwell and Stepney Heath, Middlesex, Ropemaker’, in 1648.71 In the 1630s Nicholas had an interest in a ship which transported cargo to Virginia.

Thomas Brockett of London Esq featured in 2 Chancery documents from 1659:

Thomas Cook of St Giles in the Fields 1676

The parish of St Mary in Alderman Bury was in the City of London, but a deposition of 1605 suggests that William had connections with Hertfordshire:77 This was William’s ‘per me’ (‘by me’) signature to his deposition:78

The deposition throws a spotlight on William’s work and its reported speech brings him back to life. The court asked William and 4 other deponents 11 questions—“Interrogatories to be minestred on the parte and behalf of Christopher Smythe gent sonne of Nicholas Smythe gent deceased by Katheryne Smythe wyddowe his mother and Garden [guardian] Complainants against George Rotheram sonne of Nicholas Rotherham gent deceased Thomas Atwood Agnes Rotheram his guardian, and Danyell Cotton Defendants” concerning a messuage and 50 acres of land held of the manor of Hemel Hempstead, Hertfordshire.79

1. William was a Gentleman, aged about 37 in 1605, i.e. b c 1568.
2. Nicholas Smithe, gent of Westminster, and Nicholas Rotheram were both deceased—probably recently—and William had known them both 8 or 9 years before they died. Metcalfe’s 1886 pedigree of Smyth of Annables shows the 2nd son of Christopher Smyth of Annables, co Hertf., Clerk of the Pipe, as Nicholas Smyth of the City of Westminster, husband of Catherin GARDNER, their 1st son Christopher.80 It also shows Nicholas’ sister Jane as wife of Geo. Rorherham of Somerdis, co. Bedf. A 1595 Copy of a recognizance is recorded between John Luke of Annables, gentleman, and George Rotherham of Someries, Bedford, in connection with the payment due by John Luke for the debts of Christopher Smyth, late Clerk of the Pipe.81 Harvey, Cooke and Owen’s 1884 pedigrees of Rotherham of Someries in Luton shows the 3rd son of George Rotheram of Someries [who] died 1599 and his 2nd wife Jane da. to Christopher Smith, Clerk of the pipe, of Annables in com. Hertfford, as Nicholas Rotheram of London, who married Agnes da. of Thomas ATWOOD, and their 1st son was George Rotherham.82
3. William’s involvement in the case shows that he was trained in the law.
4. His signature shows that he wasn’t the William Brokett b c 1561, see the separate page. He must therefore have been the William who gained admission to Gray’s Inn on 2 Feb 1611/12 as “son and heir of John Brockett of Kimpton, Herts, Gent”.83 John was the youngest son of Edward Brokett of Letchworth Esq, and also called ‘of Stow Longa’, see the separate page. This William was therefore a younger 1st cousin of William Brokett b c 1531.
5. William was a servant of Nicholas Smithe, and at the time of the sale in 1601 of the property referred to in the case was in attendance in his house in Westminster. Servant in this context could be translated as ‘steward’ or ‘bailiff’. William was called to Nicholas on his death bed to set down his debts and what his estate was. William therefore had had training in the law.
6. The property was held by copyhold of the manor of Hemel Hamstead, of which Nicholas Smithe was under steward at the time. Although Nicholas Smithe paid the surrender was made to Nicholas Rotheram. Nicholas Smithe often used the name of Nicholas Rotheram in his dealings, upon special trust and confidence. In this case since Smithe was steward of the manor the surrender would not have been good unless it were taken in another man’s name.
7. William’s evidence was supported by the deposition of Francis Combes gent of Hemel Hamstead, aged about 60, xxx. He and his father had received the rent for the property for 40 or 50 years, probably as officers of the manor court.

We quote William’s deposition in full, as follows. To reproduce the impact of the spoken character of the deposition, the syntax has been maintained but to facilitate reading, archaic spellings have been modernised, e.g. knows for knoweth, consideration for considerac’on, years for yeares:+Read more

William was a servant of Robert Radcliffe, 5th Earl of Sussex, was arrested in London for a small debt and imprisoned in 1628. He was a son of William, deceased eldest son of William of Esyndon. Was he the husband of Mary and Elizabeth below? For further details about the imprisonment see here.

Mr William Brocket at Lincoln’s Inn Fields received two letters in May 1685 from his Lord in Amsterdam regarding troop movements and other matters.86 William sent a short letter on 8 Feb 1696/7 to J Ellis.87 William is not recorded as a student at an Inn of Court and was not part of the contemporary Willingale/Inns of Court Brocket clan. He was probably the son of Joseph and Mary of Southwark, bap 1640 and may have been the William Brockett Gent/Esq of St Margaret’s Westminster who is recorded paying taxes in 1688 and marrying Mrs Sarah CARRELL of Chatteris, Cambridgeshire, 2 Sep 1708 in Ely Cathedral. He died 1719.

[78] Reproduced by kind permission of the National Archives licensed under the Open Government Licence v3.0.

[84] With thanks to David Bethell for this elucidation and decipherment of an interpolation, Oct 2020.

[101] Parish Register. Image retrieved from FindMyPast 1 Dec 2017, reproduced by courtesy of The Lord Mayor and Citizens of the City of Westminster, London

[106] Boyd's London Burials, transcription by the Society of Genealogists, accessed from FMP 15 Feb 2020.