David’s mother died when he was only 3, and his father remarried when he was 11. He married Selina CLARK 15 Jul 1878 in Kilburn St Mary Parish Church, London, he a Carpenter, Bachelor, she a Spinster, daughter of James CLARKE, Dealer, both aged 22 residing 132 Alexandra Rd, near Swiss Cottage, London, witnesses Charles WORBOYS and Sarah Ann CLARKE.3 Had they lived in London a while, to be married there rather than back home in the the village Chapel? Selina was born Guilden Morden 5 Jul 1856, daughter of James CLARK Farm Labourer and Jane BROWN.4 Such was the nature of village life in those times that in 1851 her grandparents had lived two doors down from David’s.5 This was Selena Brockett in 1914, aged 50:6 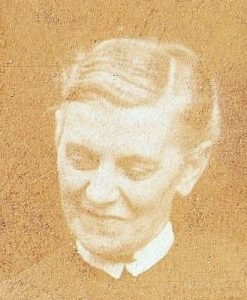 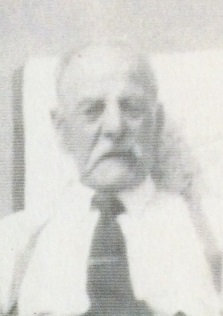 Their eldest son Frederick William said both his parents were ‘Kilburn people’ and that he and all his brothers and sisters were born there. The family moved at least three times 1902-8. Florence’s surname INNS was found from GRO entries for some of the children. She died 1943 Hampstead London, aged 65.122 Here she is with eldest daughter Winnie on the Isle of Wight in the 1930s:123 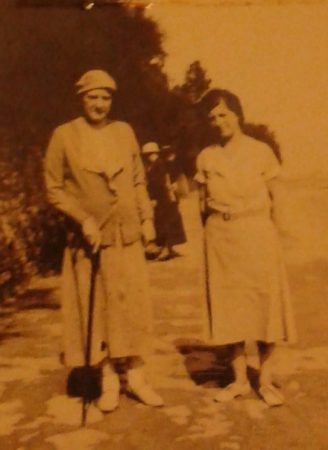 5th son of Solomon and Jane MAY, Herbert ‘Bert‘ William was born 19 Jan 1870.156 Another Herbert William, son of Samuel, from the unrelated Lincolnshire clan, was born 3 years later in 1873, St Neots District, and died 1919 Eastbourne as a result of the war. This Bert son of Solomon was a Master Decorator, residing 121 Barclay Rd, Walthamstow, E17. Builder’s Painter 1911, 14.157 Sister Florrie said she lost contact with him, and some information came from son Leslie and son Ernest’s wife and son. This is most probably a photo of him with his two sons c 1919:

It was among the papers of Bert’s daughter-in-law Trudy, the wife of son Ernest when she died. The curly hair of the boy on the left has been definitely identified as Ernest by his daughter-in-law and son. Why else would Trudy have kept the photo? It is not known if Bert was married to158 or was the long-term partner of, Mary Ann Ada CLARK/PHILLIPS. Mary Ann Ada’s maiden name was probably PHILLIPS; the 1911 census shows her surname as CLARK, Widow, and in her house was a single female relative surnamed PHILLIPS, who was still living with her in the early 50s when Ada’s grandson used to visit. On the birth certificates of two of her three sons with Bert—Herbert and Ernest—her maiden name was CLARK, but on son Leslie’s it was PHILLIPS. He died of myocarditis (senile degenaration) and acute bronchitis 8 Oct 1934, Whipscross Hospital, N Leyton, W Ham, Occupation: House Painter Journeyman, informant A Brockett, widow, residing 121 Barclay Rd.159 This was during the Depression and he had been out of work. Son Ernest recalled how as children he and his brother Leslie did not have shoes. Mary Ann Ada Brockett died of carcinomatosis of the breast, 18 Feb 1955 at Langthorne Hospital, Leytonstone, Essex SW, residing 27 Priory Court, Walthamstow, aged 83, ie b c 1872, informant son R [sic for E] W Brockett of 40 Brighton Ave, Walthamstow.160

Individual London Brokets from the 2nd half of the 19th C:171

Daniel BROCKETT, died 29 Jan 1870 at the Infirmary, Richmond, Surrey, aged 57, Coal Porter, of extensive congestion of both lungs, operation for strangulated hernia, informant Harriet E HORTON,172 Therefore b c 1813, but no IGI bap or mar, nor GRO. Other contemporary Daniels recorded elsewhere. Perhaps Brackett, but no relevant record in 1861 census.

Thomas BROCKETT, died 2 Mar 1878 at the Workhouse Infirmary, Princes Rd, Lambeth, Surrey, aged 52, Laborer, phthysis, informant Workhouse Steward.178 Therefore b c 1826, but no IGI or GRO bap or mar. Not of the clan of Thomas, Bricklayer. The 1871 census showed him to be Thomas of Chalton.

[80] Information on this family and photos were kindly supplied by Joan Fleming.

[84] Birth certificates of sons and daughter.

[114] Birth certificate. Information on this family kindly received from Frederick William in 1967; George's wife in 1998 and other descendants.

[119] Marriage certificate of sons and daughter.

[158] Son Leslie said they were married in Hackney, but no GRO record has been found..