1st son of David and Selina CLARKE, James ‘Jim’ was born 9 Apr 1879, Twickenham, baptised 27 Jul 1879, Guilden Morden Chapel in his parents’ home parish, and named after both his grandfathers.1 He is to be distinguished from James William Brockett, b 1860, Bedford District, d 1938 Alloa, Scotland, son of John and Elizabeth RUSSELL.

Photos of his siblings and some of his children have been found, but none of himself. This was his signature in 1897, aged 18:2

Military records for James show that he enlisted first in the Middlesex Regiment on 3 Nov 1897 aged 18½, was discharged medically unfit 10 Aug 1899, and secondly served in the Army Service Corps from 11 Nov 1915 aged 35, until 21 Feb 1919. Both were voluntary enlistments, conscription for World War I didn’t come in till 2 Mar 1916 with the Military Service Act.+

James enlisted first for 12 years in the Middlesex Regiment on 3 Nov 1897 at Hounslow, Middlesex, “aged 18½, Labourer, height 5ft 5½in, weight 116 lbs, chest measurement minimum 32½ in, maximum 34½ in, complexion fresh, eyes brown, hair dark brown, Baptist, no distinctive marks”.3 He was enlisted as a Private, appointed as a Lance Corporal 6 months later on 11 May 1998, but “reverted at own request to Private” 6 months after that on 13 Jan 1899, and then was “discharged medically unfit for further service 10 Aug 1899“, having served 1 year and 281 days.4 This was just before the Second Boer War began on 11 Oct 1899 in S Africa, and James’ service was all in Middlesex. His next of kin were given as “Father & Mother David & Selina, 23a Montpelier Road, Twickenham, brother (younger) Frank, 2 sisters May, Grace”. His Medical History recorded that his “Habits were regular, and conduct very good”, but he was “invalided at Woolwich 24 Jul 1899 on account of a Middle [right] ear infection”.5 It recorded that he was first hospitalised on 3 Feb 1898 and had 5 further spells in hospital of increasing length culminating in one of 104 days between 29 Apr to 10 Aug 1899 with “no improvement” in the condition which had become “severe and very chronic”. These were the days well before the effects of penicillin had been properly discovered.
+++
James Brockett 6889 136889. Short service enlistment on 11 Nov 1915 for duration of war. Address: 9 Helvetia St, Perry Hill, Catford. Age: 35 yrs. Motor Driver. Previously served 2 yrs 9 mnths in the 2nd Midx Regt.6 Birthplace Twickenham. Weight 124 lbs. Height 5ft 6in. Girth when fully expanded 36in, range of expansion 4in. Mole right cheek. C of E. Next of kin: Mrs Annie Brockett of 9 Helvetia St, Catford, SE, wife. Married Annie Whing, Spinster, Richmond Surrey Registry Office 1 Aug 08. Children Frank James, b 9 Oct 1910 Richmond, Eileen Nancy, b 10 Jul 1912 Richmond, Nancy Doreen, b 1 Mar 1915 Richmond. Promoted to Corporal 5 Mar 1917 and to Sergeant 25 Sep 1917. 1914/15 Star.7 Served at home till 1 Dec 1915, when he went in the Expeditionary Force to France till 8 Apr 1916. Served again at home till 5 Jun 1916, when he went in the Expeditionary Force to France again till 22 Jan 1919. Then at home again till 20 Feb 1919. Demobilised 21 Feb 1919.8

Taking part in the Expeditionary Forces to France for most of the War, James would have witnessed, or at least known about, some of the horrific events like the battles of the Somme, Ypres, and Paschendale. A descendant said Jim had suffered from a gas attack. Whether this was true or not, these experiences would no doubt have had a big effect on him.

Sarah is found in the censuses:

1881: Sarah Jane Neate, aged 5 [i.e. b c 1876], Scholar, born Eynsham, Oxfordshire. This was in The Lea, Finchampstead, Wokingham, Berkshire, the household of her parents Henry Neate, aged 30, Agricultural Labourer, and wife Amelia, aged 29, and 3 siblings—Amelia, 7; William Henry, 4; and Lucy, 1, b Arborfield, Berkshire.
+++
1891: Jane S Neat, aged 15, General Servant, b Oxfordshire. This was in Hillside, Forest Road, Binfield, Easthampstead, Berkshire, in the household of John A Minchin, aged 28, Corn & Coal Merchant, and his wife Priscilla.
+++
1901: Sarah Jane Neate, aged 26, Single, Nurse Domestic, b Oxfordshire. This was in 21 The Barons, Twickenham, in the household of John Joseph Bithell, aged 44, Retired Civil Engineer and his wife, 69 year-old mother-in-law and 3 daughters aged 8, 6 and 4. They also had a Cook and and a Housemaid.

Living in her last residence was probably how she met Jim. 21 The Barons, Twickenham, was less than half a mile from 23 Montpelier Rd, where he was living. She apparently moved in with him once they were married and their son was born there.

Annie and her parents are found in the censuses:

From the early 1920s Annie and her children and one adopted daughter lived in 197 Lower Mortlake Road, Richmond, which she inherited from her father. After Annie’s death in 1975 it passed to her eldest daughter Eileen, and then when she died, to William, the youngest child. 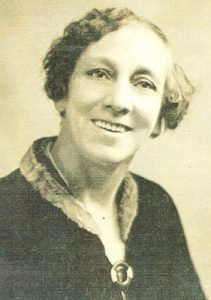 Annie Brockett c 1965 (to the left) with daughters Eileen (in the middle) and Nancy:30

Children of James and Annie

From at least the mid 1920s James also was the long-term partner of Elsie Gladys TYRRELL, nee FLEET, who thereafter was always known as Elsie Brockett—except on James’ death certificate—and with whom he had a second family. James was 15 years older than Elsie, who was born 1894 in Richmond District, Surrey.60 His wife Annie’s family knew “there was another woman” but in 2000 descendants knew very little about James, other than that he had been a Chauffeur. The daughters apparently would not have his name mentioned. According to the 2nd wife of Jim and Elsie’s son Derek in 2005, Jim and Elsie’s family didn’t know of Jim’s first family, and after their parents’ deaths were shocked to discover that Jim and Elsie hadn’t married. She said that one of Jim’s jobs as a Chauffeur had been to transport deceased Scottish soldiers back to Scotland from the Star and Garter Home for disabled soldiers in Richmond, and that he had been gassed in the war [Is this correct?]. She said they lived in Nursery Rd, Sunbury, and that Elsie had previously been married to Gordon TYRRELL, who died in the mid 1920s, and with whom she had had children, including a son called Douglas.

Elsie and her parents and husband are found in the censuses:

In 1916 Elsie G FLEET married Gordon W Tyrrell in Richmond.62 The births of Douglas G Tyrrell and Alan W Tyrrell, mother’s maiden name Fleet, were registered in Richmond (Surrey) in 1918 and 1919.63 Between June and September 1921 Gordon W Tyrrell died, aged 30, in Richmond.64 Elsie was a Widow with two sons aged 3 and 2. There was no Welfare State in those times.

Children of James and Elsie

Jim’s residences from the age of 18

When Annie married James in 1908 she gave her address as 197 Lower Mortlake Road (her parents’ home). James gave his address as Selina Cottage, Kew Foot Road Richmond. A 2019 planning application shows this to be 29 Kew Foot Road Richmond TW9 2SS.103 A case regarding the insolvency of a certain John Drew “late of Selina’s Cottages, Twickenham” dated 1 Jun 1833,104 shows the name to have predated the move to Twickenham by James’ parents David and Selina c 1879. 29 Kew Foot Road is about half a mile from 197 Lower Mortlake Road.

In the 12 years after their marriage in 1908 Annie and James lived in at least 4 places, only one more than a mile from 197 Lower Mortlake Road:

The 1921 census is not yet in the public domain, but Annie’s mother Emma E Whing died between Jan and Mar 1921, aged 78.105 Annie probably moved back to 197 Lower Mortlake Road fairly soon after this with her 4 children under 11 or 12, to live with her father. It was probably around this time that Elsie and James’ relationship became serious. Elsie’s husband Gordon had died between June and September 1921. Sylvester Whing died 1927, aged 88.106

James’ mother Selena died in 1930 at 30 Twickenham Rd, Isleworth, Brentford, 7 miles away from 109 Nursery Rd, Sunbury where James was living at the time with his second family (and 3 miles from 197 Lower Mortlake Road). Selena didn’t leave him anything in her Will, as she did with her 2 daughters. But as with her other son who had died, she left his share to his children when they reached 21.

The 1939 England and Wales Register

Since the 1931 census was destroyed during an air raid on London and the 1941 census was never taken, this Register—taken just before the outbreak of the 2nd World War—usefully fills the gap between 1921-51. The Register shows:

[1] Information on this family kindly received from several descendants.

[2] Taken from his Military Attestation form at recruitment in Nov 1897.

[20] Birth and death certificates of son.

[29] Compton Terrace apparently no longer exists, but it was probably not 197 Lower Mortlake Road, since the neighbours were different to those of 1901.