Thomas of Chiddingstone - The Broket Archive

Eldest son of William, eldest son of William of Esyndon, Thomas is recorded as “of” several places in different documents and of no known abode in others. He died and was buried in Chidingstone Church, Kent, c 7 m SE of Oxted, where his father had owned a house called Stockenden. Sources for Thomas are:

Items 2, 3 and 4 mention Thomas’ involvement with Samuel Cowley. The Chancery documents show that he was Cowley’s Administrator and the other items claim that he had earlier been in collusion with him to the detriment of his mother and siblings. The first claimed he had “no certaine abode, being hid away by the said Cowley” and the second that “persuaded by Samuel Cowley” he “had not been heard of for two years“. The only other record of Cowley found so far is of a £2000 bond granted in 1634 by “Samuel Cowley of London merchant” to gentlemen in Lincolnshire.2

Item 5 mentioned his bequest to his daughters Mary and Anne of “my Messuage or Tenement and Lands called Bullers with thappurtenances lyeing and being in the severall parishes of Blyford Conintston Holton Bulcame Specsale Ovysett and Ilkestsale or the where in the County of Suffolke“. His grandfather William had died owning this property.

The name of Thomas’ wife is not known, but she had died by 1661, when he made his son Thomas sole executor of his will. All this and the Will of his son Thomas Brockett of Penshurst, Gent, written 15 Apr 1670, proved 17 Nov show:3 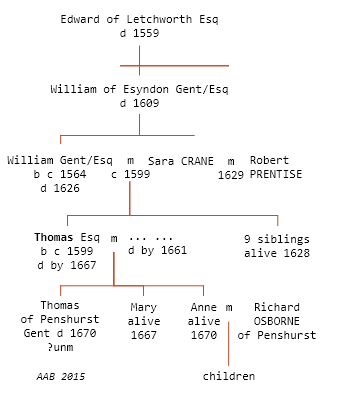 Son Thomas was excommunicated on 1 Oct 1668 by the Dean of Shorham and Croydon for contumacy—failing to present himself to answer charges against him.4 The charges aren’t stated, but they were probably of a religious nature. Quakers were active at this time. Excommunications not being that common at that period, the people listed in the document may well have been in trouble together:

That Thomas was referred to in terms of his father’s Will—proved just 10 months earlier—rather than by his residence, suggests that his execution of the Will was linked to his excommunication. Thomas died 2 years later.