The Ainsty in the West Riding

The Ainsty was a flat, fertile wapentake of about 100 square miles to the west and south of the City of York nearly surrounded by the rivers Nidd, Ouse and Wharfe.1 The Ainsty was under the jurisdiction of the City of York and had closer links with the City than the rest of Yorkshire. Its east side contained the parish of Bolton Percy, which in earlier times included the townships of Appleton, Bolton Percy proper and Steeton. At the south-east tip of the parish the Wharfe joins the Ouse to flow on past Selby and about 30 miles later passes Hull on out to the North Sea.

Broket places in the Ainsty 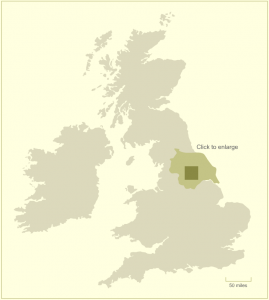 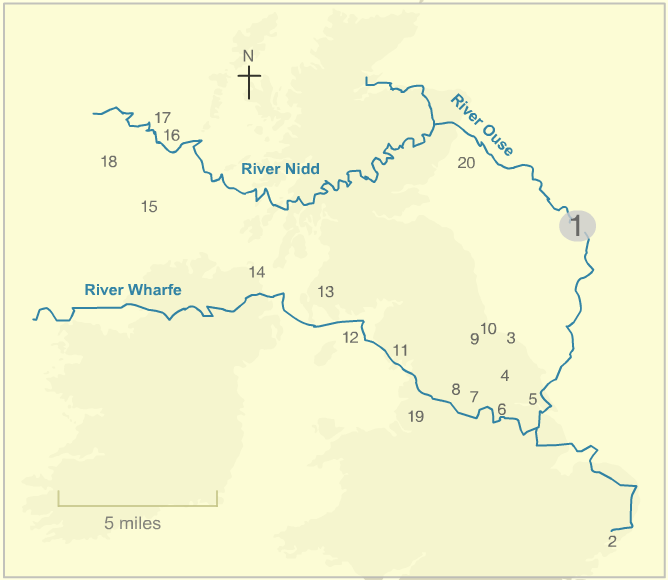 See also this map of the 3 Ridings.

The parish of Bolton Percy was an area of c 6 square miles on the east of the Ainsty, bordered to the south by the river Wharfe—c 20 yards wide. In earlier times the parish comprised 6 vills or ‘townships’: Appleton, Bolton Percy proper, Colton, Hornington, Nun Appleton and Steeton. These were part of the Percy Fee between 12-14th C.2 Appleton and Steeton were a half-hour walk apart—about 2 miles—and no more than 6 or 7 miles from York Minster. Lords of manors were in close and frequent contact with the City, and could reach its gates on horseback within the hour. The east window of the Parish Church is a rare surviving medieval depiction of the Virgin Mary.3 Brokets were lords in Appleton for 170 years and would have been buried in the church for over 130 years after its rebuild in 1424.

Now called Appleton Roebuck. In 1379 Appleton comprised c 200 inhabitants living in some 40 houses.4 Cecilia Broket was one householder. There were 3 manors in Appleton, the largest being Southwood—later called Brockethall Manor—a moated site at the east end of the village. The Fauconbergs and then the Sampsons were lords of Southwood before the Brokets.

The Elizabethan Brocketts of Wheathampstead clearly thought of Steeton as their ultimate place of origin. Glover traced a line for them there stretching back to the 1200s [without dates]. Although this coincides with dates of the earliest records of Brokets elsewhere in the Ainsty, two 1269 deeds listed no Brokets among the occupants of Steeton’s 27 tofts.5 Perhaps marriage first brought them to Steeton late 13th or early 14th C from a nearby township.

Including children and those who evaded or couldn’t pay the poll tax, the population of Steeton in 1379 was c 100. They lived in 20 or more houses on either side of the one street.6 Nicholas Broket and family were there then and deeds suggest that his forbears had been landholders there for at least 50 years. In 1450 half the township was granted to Edward Broket, although by then there were probably no Brokets living there.

Steeton is a ‘lost village’, the traces partially destroyed by the building of a great pond, now dry. The outlines can be seen from an aerial photograph.7

‘Steeton was like most lost villages – [It would have] grown up as a community of husbandmen, whose lives were wholly or partly centred on the growing of cereal crops. In the century from 1450 to 1550 the owners of the fields wished to put their property to another farming use, a more profitable use, bringing them not only more money but smaller labour-costs than in corn-growing. These men wished to become graziers of sheep or cattle. Such a transformation … took away the need for the services of most of the villagers. … [They] left or were evicted’.8

Subsidy records in York City Archives actually suggest that it was cleared for sheep a good deal later.

Edward’s Broket Will of 1485 mentioned a manor called Jewleas. This was probably the ancient moated site in Nun Appleton bordering the Wharfe.9