“Richard the son of Philip Fawconberg gave all his mannor of Suthwood in Appleton to John Sampson of York knight & Mary his wife which he had of the gift of Walter son of Peter Fawcomberg”
[marginal note by Dodsworth:] “I take this Mary to be Richard [Fawconberg]’s heire“.1 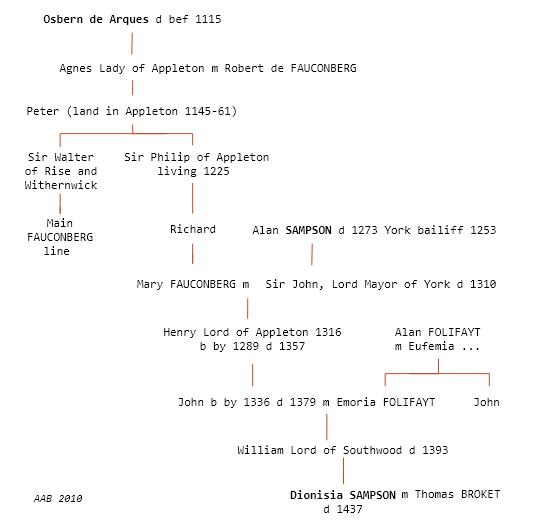 In 1299 a Thomas Brocket was one of a group evaluating a property of John and Mary’s in Nun Appleton for the sheriff.

Sampson: Sable a cross flory or

William Sampson and wife paid 40d as a Franklin—a substantial freeholder.9 This was the highest payment in the vill, but half the normal rate for franklins and equivalent to the rate for landless esquires.10 The Sampson family was probably in decline by 1379.11

Written 11 Sep, pr 30 Oct 1393. William willed to be “buried in Bolton Percy church next to the grave of my father”. He had previously passed on all his property, including the manor of Southwood, since the only bequest was to his executor: “The rest however of all my goods I have given to John Saynell of Normanton by a certain writing confirmed by my seal to pay my debts”.14

The Calendar of Close Rolls records one other Appleton Sampson after their manor had passed to Thomas Broket, as witness to a land deed there:+Read more

1396:15
John de Staynforde of Apilton to Thomas de Clapham and Thomasin his wife, their heirs and assigns. Quitclaim of all lands, woods etc. in Apilton which descended to him after the death of William de Staynforde his elder brother, upon condition that they and the longer liver of them, their heirs and assigns shall find the said John meat and raiment all his life. Witnesses John Depedene knight, Miles de Stapilton, William de Twaytes of Merston, John Daynell of Bylton, William Barker, Thomas Harden, both of Tadcastre, Thomas Sampson of Apilton. Dated Apilton, Tuesday the feast of the Assumption 20 Richard II.
Memorandum of acknowledgment at York 26 August before Hugh Huls, by virtue of a dedimus potestatem (we gave power) which is on file for this year.

4.1. A deed from 1458 confirmed that Dionisia was the daughter of William.

4.2. She died 14 April 1437 and was buried in the Brockett Chapel in Bolton Percy Church, 2 years after her husband Thomas Broket, and no doubt next to him in the centre of the chapel, head towards the altar.

4.3. Dionisia’s descent from the Folifayts of Badsworth—and hence a claim to be the heir of the Nevilles—was recorded in the preamble to an unsuccessful suit brought in York by Thomas Broket and Dionisia against Thomas Urswyk for the manor of Baddesworth in 1424:16+Read more

Thomas Broket & Dionisia his wife represented by Richard Shipley plaintiffs versus Thomas Urswyk
[concerning] the manor of Baddesworth with its appurtenances which Roger Folifayt gave Alan Folifayt & Eufemia his wife
and the heirs issuing from the bodies of Alan & Eufemia and that after the deaths of the said Alan & Eufemia &
of John the son and heir of Alan & Eufemia & [the deaths] of Emoria sister of John & of William son
of Emoria it ought to descend to the said Dionisia daughter of the said William and cousin and heir of the said John by means of
the deed of the aforesaid gift etc. Wherefore they say that …
Wrottesley gave the name of William’s mother as Eujoria (sic).

The end of the FAUCONBERG of Rise main line:17

In 1422 Sir William Neville inherited all the castles, manors etc of Sir Thomas of Skelton through his wife the Fauconberg heiress Joan, and took on the Fauconberg title. Wiliam was a prominent Yorkist commander during the Wars of the Roses, leading them to the decisive victory at Towton in 1461, which “was not only the climax of the dynastic struggle between Lancaster and York, [but] also the denouement of the feud between Neville and Percy”.18 Although the Fauconbergs’ Appleton lands had been held by younger sons while the main line were barons in Rise in Holderness,19 the main line nevertheless had maintained links and William Neville inherited a quarter of a knight’s fee in Appleton. 20

William had no son, so his 3 daughters became Fauconberg co-heiresses. Or at least 2 did—Joan is said to have been “a fool and idiot from birth”.21  Nonetheless, the Appleton inheritance may have descended to Joan. Whether connected or not, a curious reference occurred in the Visitation of Yorkshire re the Conyers family, whose heir married the 3rd daughter Alice, that [after 1472] the eldest daughter Joan Fauconberg was “married to Nicholas Belliany, sans issue, and after to Mr. Thos. Brocket, of co. Herts, and had issue”.22 This is corrupt. Nicholas Belliany is unknown and although all Hertfordshire Broket gentleman of the late 1470s are known, this Thomas is not.

The Strangways and Conyers were 2 of the main knightly families of 15th C North Riding of Yorkshire, sharing by parallel marriages the succession of 2 baronies, the Darcy heiresses in the 1st half of the century and the Fauconberg heiresses in the 2nd.23 Connecting a Brocket to the 3rd heiress was a fabrication.

The Complete Peerage relegated the 2nd and 3rd of Joan’s alledged marriages to a footnote,24 dismissing the 3rd as neither to Thomas who married and predeceased Dionesia 1435 nor to his son Thomas who married and predeceased Elizabeth Ashe 1477. These two, apart from being esquires were in any case too early, and only a Thomas from the next generation could have been possible. In the 1570s Glover gave Edward 2 sons Thomas: one marrying Elizabeth Calthrop and [presumably] an earlier one dying unmarried without issue. Glover was by no means accurate in all details but it is hard to imagine a reason for him to omit a marriage to an heiress of a peer like Joan Fauconberg, especially if there had been issue. Edward’s Will shows that a Thomas was not a surviving son in 1485.