As well as a couple of links to Glaswegian Brocketts from other clans this page includes the 8 sons of John Wilson Brockett 1837-1911 and Christina YOUNG of Penicuik. 6 of the 8 had upwards of 24 sons between them, most of whom had families of their own, which is the main reason Glasgow has the largest number of Brocketts in Britain today.1

The sons of John Wilson and Christina YOUNG:

3rd—and 2nd surviving—son of John Wilson and Christina, and the 2nd William in the family. Both Williams had large Glaswegian families:

William married first Catherine ROXBURGH 9 May 1881 in Camlachie.57 She was born c 1863 daughter of William ROXBURGH, Carter, and Margaret STEADMAN, and died 1 May 1889 of phthisis pulmonalis one year, aged 26, at 17 Nisbet St, Westmuir, Camlachie.58 Children:

The 1871 census for Parkhill Farm Rutherglen showed David’s birthplace as Auchindenny, about a mile north of Penicuik. His marriage certificate 1883 showed him living at 702 Springfield Rd, Glasgow, occupation Iron Forge Hammerman, with Jessie, a Grocer’s Saleswoman. The 1901 census gave his occupation as Iron Driller, Sewing Machine Factory, residing Drummond’s Land, Faifley. In 1925 he was a Sewing Machine Inspector.108 He was a prominent member of the church and Superintendant of the Sunday School, so when he died there was a large funeral in Clydebank and over his grave in the Clydebank cemetery stands a large gravestone. Their house from 1918 in 17 Clarence St, Kilbowie, Clydebank was named Auchendenny after his birthplace.109 The couple are buried in Kilbowie Cemetery. 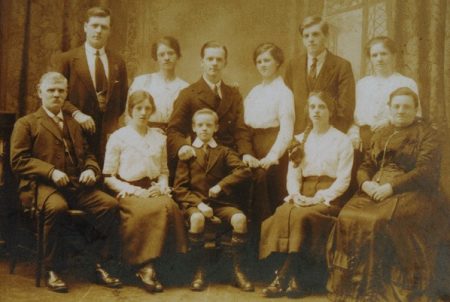 6th son of John Wilson and Christina, John was born 31 Jan 1870, Rutherglen;123 and died 1930, Hillhead, Glasgow W. At parents’ home for the 1891 census, unmarried, aged 26 (actually 21), Wire Weaver. As Commercial Traveller residing 702 Springfield Rd married 1897 Jeannie WILCOX Camlachie. For the 1901 census, John and Jeannie Brockett were at 270 Gt Eastern Rd, Calton (with several other families in the house), he aged 35?, a Professional Vocalist, born Rutherglen; she, 28, born Glasgow. With them was John Hamilton, nephew, aged 18, unmarried, Grocer’s Assistant, born Shettlestone. Did the couple go to the USA in 1911? 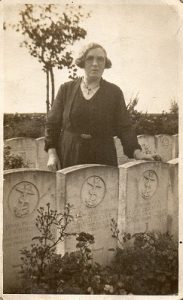 8th and youngest son of John Wilson and Christina, Andrew was born 11 Apr 1875 in Bridgeton, Glasgow,161 and died 1963 in Bridgeton, Glasgow. He was at his parents’ home for the 1891 census, aged 16, Message Boy in Cotton Mill, and again in 1901 with parents, aged 24 (actually 25/6), Winding Master in Mill.162 On 15 Jul 1904 he was described as Weaving Factory Warehouseman, residing 38 Steven Parade, when he married Annie Winning DUNBAR in Camlachie, according to the forms of the Primitive Methodists;163 Annie was described as Power Loom Weaver. Annie died 21 Aug 1949, St Quivox Rd, Monkton and Prestwick, Ayrshire; Andrew was then an Insurance Manager,164. Her death certificate was signed by William Brockett, son, of Allen Rd, Wednesbury—a few miles NW of Birmingham.

[82] Signature on marriage certificate of brother 1978.

[107] Many thanks to Charlotte and Ian Muir for information on this line and photos.

[118] Many thanks to Colin and Helen Brockett for information on this family and the photo.

[129] Death certificate. Information on this family kindly sent by Tam Brockett, Jan 2019. If a source isn't mentioned it will be him.

[132] From his father's death certificate and his own army pension records, TNA WO364, reproduced by kind permission of the National Archives licensed under the Open Government Licence v3.0.