Weddings of lowland Scottish working folk in earlier times usually took place in the bride’s parish—sometimes at the home, or in a nearby larger house or inn. The groom would be from the same or a nearby parish. Thus Margaret MURDOCH probably came from Wandell and Lamington; John too, or from nearby. Her surname was also spelt MURDISON once and MUNDEL once—the latter presumably a dittography from Wandell. He was probably the John christened Wiston 1762.

John and Margaret stayed in Wandell and Lamington for 4 years after their marriage and then moved 21-24 miles up the Edinburgh road to Penicuik. John found work there as a Labourer and later as a Silk Weaver. John and Margaret’s elder son Thomas worked there as an Agricultural Labourer, but his line either died out or moved away. Their younger son William worked in the Penicuik Paper Mill, as did his son John Wilson after him and his wife before they moved to Glasgow in the 1860s. The Penicuik period had lasted c 65 years.

Most contemporary Glaswegian Brocketts descend from John Wilson and Christina. Following Scottish tradition children were often named for a grandparent or other ancestor, like Thomas Young and David McFarlane, and in the next generation John Wilson, Christina Young, William Glendinning.

Son of John and Margaret MURDOCH or MURDISON. Apart from Thomas’ christening only a few records have been found for this family.

None of this family was recorded in the OPR except:

2nd surviving son of John and Margaret MURDOCH or MURDISON. William and Marion McFARLINE married in Penicuik 29 May 1835.

John Wilson was their only child. William died 9 Jan 1855 in Penicuik, aged 52, of fever, buried in Penicuik Burial Ground, parents John, Labourer, Margaret MURDISON, both deceased.3 His wife was deceased and his son John Wilson was 18. In the column ‘Where born and how long in this District’ the certificate had ‘Penicuik, 21 years in Penicuik’ suggesting he went elsewhere before 1834.

John’s occupation: 1856, 57, 60 Paper Factory Labourer/ Worker,5 1862 Paper Maker.6 In the mid 1860s they moved west to the Glasgow area—the heart of industrial Scotland—and later John’s occupations were given as:

John and Christina are recorded in a photograph c 1907 at the christening of a great grandchild: 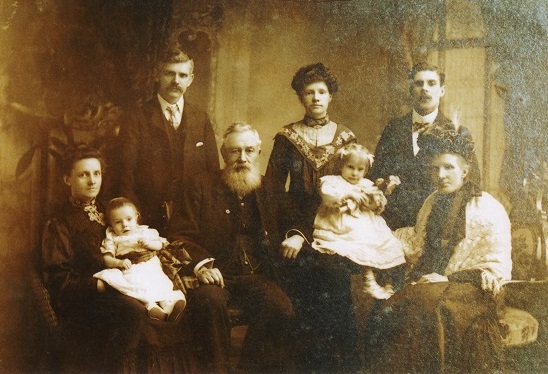