In the wider Broket DNA project Bill is in Genetic Group 3.1

Bill and Connie Brockett in the 1950s

1989: Constance died in New Haven and is buried in Beaverdale Cemetery, Hamden, CT: 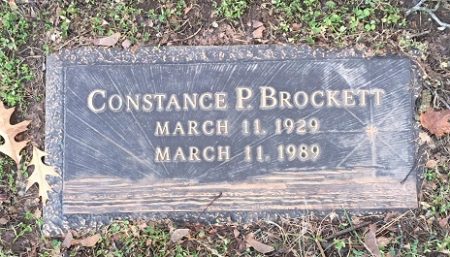 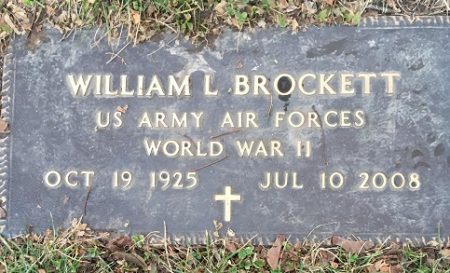 William Leroy was the son of: 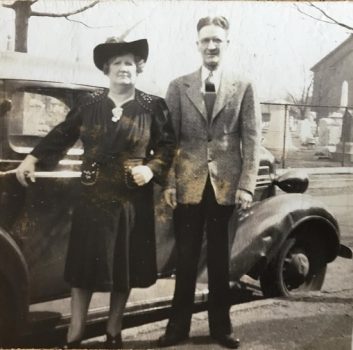 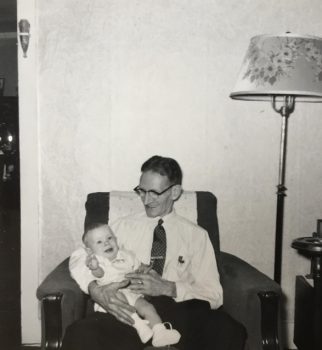 Richard Lewis was the son of:

1890: The census records were mostly destroyed by fire and no records of Brocketts survived.

1910: The census (15 Apr) recorded Louis L Brockett, aged 38, divorced, Laborer at home in the oyster business, living with his parents at 476 Quinnipiac Ave, New Haven; with son Louis R Brockett, aged 17, Locksmith; both born in CT. Ellen F Brockett, 36, Cartridge maker at a gun shop, divorced, mother of 2 children, both living, was at the home of her parents George and Charlotte HUTCHINS a couple of doors away at 466 Quinnipiac Ave, with her daughter Margaret, 12, at home; all born in CT.14

1920: The census (30 Jan) recorded Lewis Brockett, aged 47, married, home owner in Madison, New Haven Co, Laborer on the State Road. Living with him were his mother and father Nancy and Lewis J Brockett, aged 76 and 79; all born in CT.15

Lewis L was the son of:

1890: The census records were mostly destroyed by fire and no records of Brocketts survived. 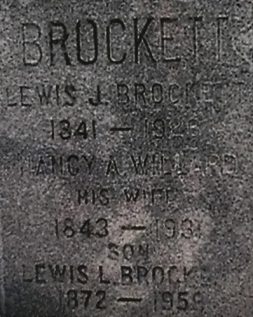 Lewis Jared was the son of:

1820: For the census (6 Aug) Lewis would probably have been one of the under 10 year olds in Jared Brockitt’s household. 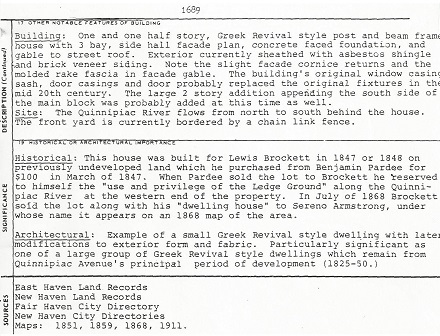 1861-5: Lewis Brockett, Private in the 27th Regiment, Connecticut Infantry, Company C, on the Union side in the Civil War was probably this Lewis.30

Here is Chauncey’s signature on a letter dated 10 Jun 1863 from Fort Dreury VA to his brother Lewis J Brockett at Fair Haven:31 Fair Haven was alternately part of East Haven and New Haven.

Chauncey died 3 years later in 1866 and was buried in the Montowese cemetery, North Haven: 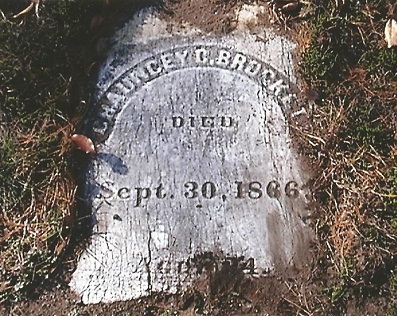 1874: 26 Jul. Lewis of North Haven, aged 57, married, Mason died from Phthysis (TB or consumption).33 He was buried in the Montowese Cemetery, North Haven, beneath a Civil War Marker with initials L B only. 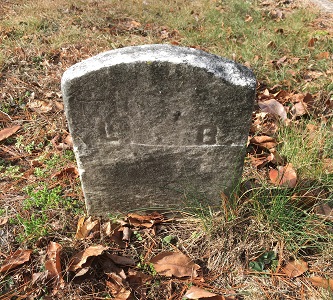 1902: 13 Jun. Esther Stevens, wife of Lewis Brockett, was buried in the Montowese Cemetery, North Haven. Her husband’s small Civil War Marker can be seen to the right and a little behind Esther’s gravestone:34 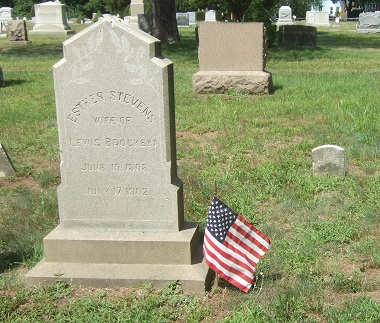 Lewis was the son of:

1780: Jacobus recorded the Congregational Society, North Haven (NoHC) entry for Jared’s baptism on 5 Nov 1780 as the 3rd child of Stephen:35 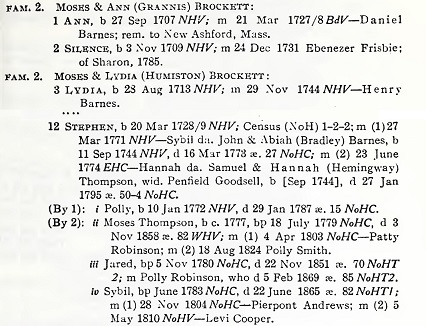 1800: For the census (4 Aug) Jared would have been the younger of the two males aged 15-20 in Stephen‘s household in North Haven.

Also in North Haven in 1820 were the Brockitt households of Abraham, Ebenezer, Peter and Rebecah. 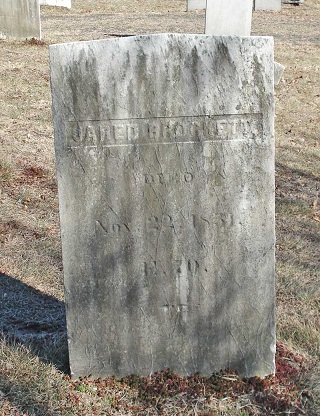 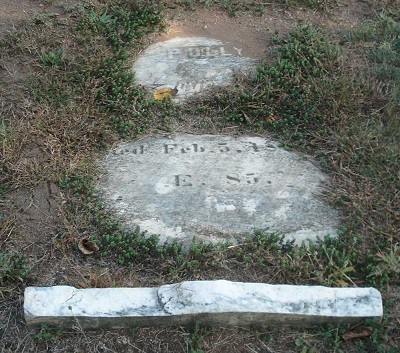 Jared was the son of:

For information on this important source, see the separate page. The extract from Jacobus above shows that he cited both NHV records correctly. No further record of Stephen or his family were recorded in the NHV. As Jacobus’ subsequent citations suggest, they moved to North and/or East Haven.

The extract from Jacobus shows the following further details: Stephen was the 12th of Moses’ 14 children,45 and that his first wife Sybil was the daughter of John and Abiah (Bradley) Barnes. Jacobus cited the NoHC (the Congregational Society, North Haven) entry for Sybil’s death 2 years later on 16 Mar 1773 aged 27, and the EHC (Congregational Society, East Haven) entry for Stephen’s 2nd marriage on 23 Jun 1774 to Hannah daughter of Samuel and Hannah (Hemingway) Thompson, widow of Penfield Goodsell, b [Sep 1744]. Jacobus cited the NoHC entry for Hannah’s death on 27 Jan 1795 aged 50-4, but recorded no date of death for Stephen.

Also in the neighborhood were the households of Joel, Ebenezer, Isaiah and John Brockett. The last was Richard’s older brother.

Note: A Stephen Brockett was recorded in 1810 in Dudley, Worcester, Massachusetts, aged 26-45, along with several other Brocketts and one Bracket.49 However the 1820 census recorded them all as Bracketts and they are found in the Brackett Genealogy.50

Note his surname Bracket for his marriage.

Jacobus recorded 14 children for Moses: 2 daughters with his 1st wife Ann GRANNIS, and the other 12 (6 daughters and 6 sons) with his 2nd wife Lydia HUMISTON.53 Their 7th child and 3rd son John 1722-1812 was the ancestor of Richard Heaton Brockett.

Lydia died on 6 Apr 1742 and Moses on 5 Nov 1764, and both were buried in Montowese Cemetery North Haven, their headstones appear to be back-to-back:54 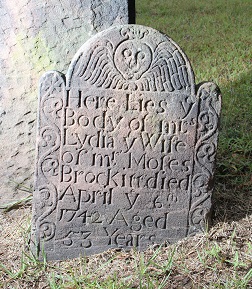 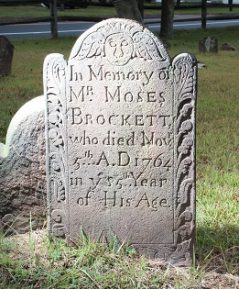 Moses was the son of:

John was the eldest son of John of New Haven.

1. Harold E BRACKETT 1916-81
2. Richard H BROCKETT 1912-2005
+++
Discussion: Harold E and Richard H are William Leroy’s 6th and 7th cousins respectively, yet all three have identical Y-DNA (Genetic Distance zero). William Leroy and Richard H Brockett both traced their descent from John, son of John of New Haven, died 1690, the original immigrant. The ancestry of Harold E Brackett has been traced back to Christopher Brockett/Brackett, descended from a different son of John of New Haven, died 1690—Samuel. No mutation has thus occurred in these lines over 7 or more generations, or at least 350 years, validating all three lines right back to the original immigrant John Brockett of New Haven: 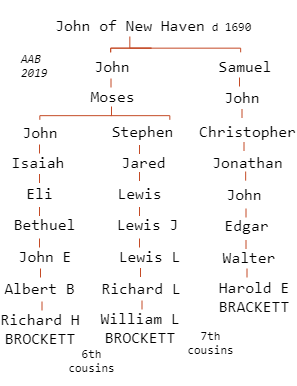 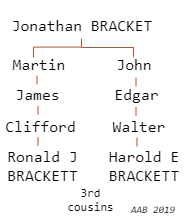 1. Marlin L BROCKETTE 1913-2000
+++
Discussion: This participant also descended from Capt William Brockett 1748-1819/21, and the same considerations apply as with participants with a Genetic Distance of 2 from William Leroy, discussed above.

[1] Many thanks to Ronald Brockett for generously sharing his research and kindly supplying information. Where a source isn't cited, the information will be from him.

[12] Grieving family may not care so much about reporting correct details (communication from Ron Brockett).

[31] Image kindly supplied by Ron Brockett from the letter in his possession.