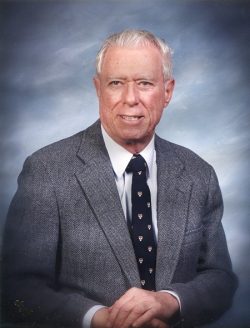 Clyde was a lifetime resident of Norfolk, Virginia, and a Professor of Music/Musicology. He was interested in his family’s history and in and around 1997 he found several early references and documents relating to Brokets in the colony of Virginia. He was also among the first participants in the Brockett DNA project, see the separate page. However Clyde has not yet been matched by another participant—we need more participants who descend from southeastern US Brokets.

1. Evidence for each generation back from Clyde 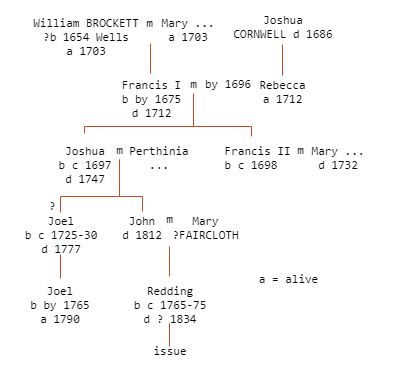 As discussed on a separate page, in 2022 it was realised that William and Mary’s surname was not in fact Brockett, and Nash’s suggestion that William may have been the William who entered a 4 year indenture in Bristol, England, in 1668, bound for Virginia, and was possibly baptised 1654 in Wells, Somerset, was proven to be wrong. Other elements of the chart above are also speculative, but much more likely, including the line from Redding to Clyde. More Y-DNA tests of relatives will help.

Clyde “Nat” Waring Brockett, Jr. PhD
Born in Norfolk, Virginia
Died 23 Jun 2015, aged 80, buried in Forest Lawn Cemetery
+++
Son of the late Clyde and Omeda Brockett and attended St Paul’s Episcopal Church, where he enjoyed singing in the choir. After attending Norfolk Public Schools, he received his undergraduate degree in Music at William and Mary. Soon after, he joined the Navy and ultimately attained the rank of Lieutenant Commander, serving multiple Mediterranean cruises aboard the USS Aucilla and USS Salamone. After active duty, he continued to serve in the Navy Reserve for the next 20 years. … Nat then attended Columbia University, earning his PhD in Musicology in 1962. Nat worked for 25 years at Christopher Newport University, teaching music appreciation and history. He retired as Emeritus Professor of Music/Musicology in 2003, but continued to research, attend conferences, and travel Europe for the next decade.

Clyde was recorded in the 1940 census as son of Clyde and Omeda Brockett as follows:

More than one Clyde Brockett lived in the US in the the late 19th to mid 20th C, and it’s necessary to distinguish them. There was the family unit of Clyde H and Myrtle Brockett in Arkansas in the 1920s, 30s and 40s, which included a Clyde jnr, born in Arkansas c 1925. That Clyde H was b c 1891 in Illinois. There was also Clyde, aged 18 in Manhattan in 1910, single, Black, b 1892 New York.2 As for this Clyde Waring of Virginia, his mother was also Myrtle Brockett, as shown by this first record of him so far found:

Other records of the family unit:+Read more

1926: 17 Apr. Marriage of Clyde H Brockett and Anne O DAVIS in Norfolk, VA, both described as White and Single, he aged 29, b 1892 Elizabeth City, she aged 29 [sic], b 1897 Norfolk. His father and mother given as J B and M A Brockett, hers as Taylor and Harrette DAVIS.12
Comment: Anne O presumably wasn’t the Omeda of later records. Is the ‘H’ correct?

Clyde Waring was the son of:

In son Clyde’s marriage record of 1926 his father and mother were given as J B and M A Brockett. Other records cited above show her to have been Myrtle A L Brockett, born in Virginia, remarried in 1902. The 1900 census for son Clyde and his siblings said their father (who was deceased) was born in N Carolina, as did the 1910 census. However the 1930 census record for son Clyde said both of his parents were born in Virginia. The B initial may have stood for Byron—John Byron Brockett was the name of their first son.

2. Some analysis of Clyde’s Y-DNA results

Haplogroup: R-M269
According to FTDNA: “Haplogroup R-M269 is 25,000 years old and its region is: Western Europe; with low frequencies in Turkey, and the Northern Fertile Crescent.”

[9] 1910 US Federal Census for part of Ward 2, Norfolk City, Norfolk, VA, sheet 8B. Surname mistranscribed as Brockel in some databases.