Broket migration to North America continued apace in the 19th C. If you know of other 19th C Broket immigrants not listed here please send us information and we’ll acknowledge your help.1

For the 20th C see this separate page.

Edwin, born 1830 Durham, NE England, son of Robert Brockett immigrated to Hensonville, NY, USA in 1855. But no record of an Edwin b c 1830 from Durham has been found. He was recorded in the History of Greene County:2+Read more

“Edwin Brockett, the son of Robert Brockett was born in Durham in 1830. In 1855 he removed to Hensonville, where he engaged in mercantile business, which he continued till 1870. In that year he removed to Windham, where he followed the same business till 1881, when he retired, and was succeeded by his son, Charles Brockett, who continued the business here. Mr. Brockett was appointed postmaster at Hensonville in 1861, and served in that capacity till his removal to Windham. In 1871 he was appointed to the same office in the latter place, and he has held it to the present time. In 1855 he was married to Huldah Parsons, of Windham, and they had three children. In 1871 he was again married, to Mrs. Henrietta Peck, of Windham, a granddaughter of Judge Buell, and a daughter of Judge Goslee. They have one child.
+++
The extract also reproduced this image of Edwin’s store and residence in Windham, Greene County:3
+++ 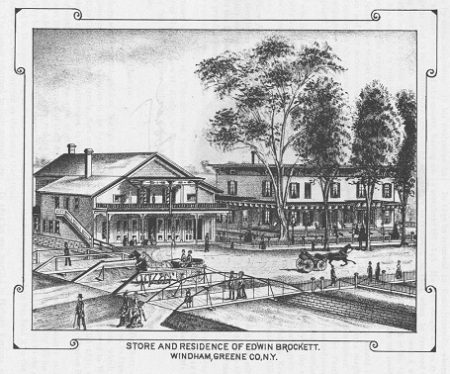 According to this, Edwin was a businessman and postmaster at Hensonville 1861-71, and Windham 1871-81, succeeded by his son, Charles. He married 1st 1855 Huldah PARSONS of Windham, and 2nd 1871 Henrietta PECK née GOSLEE of Windham.4

An Earnest was recorded in the 1881 Canadian census. Might he have been Frederick Ernest, son of Frederick and Margery of Haltwhistle, Northumberland, born 1870?

A William, aged 30, Millhand, ethnic origin Russian, was recorded in the 1881 Canadian census for North, New Westminster, BC. His Russian origin looks questionable. Perhaps he came up from the USA. He wouldn’t have been the William who emigrated to Upper Canada 1831 from Lesmahagow.

Barbara Brockett, aged 26, ie b c 1866, Weaver from Scotland, arrived Ellis Island 9 Jan 1892 on the Pomeranian from Glasgow.5 No Barbara is known marrying a Brockett in the early 1860s and the only Barbara recorded born in the BMDS around that time was Barbara b 1861 Glasgow, ie aged c 31 in 1892. If this was her, she returned to Scotland to marry in 1894.

Kali Brocket, female, aged 31 arrived Ellis Island on the Liberia 21 May 1892 from Monrovia, Liberia.6 Indigenous Liberians didn’t have European-style surnames, like Americo-Liberians, the ruling class of descendants of freed American slaves. Might Kali have been such a descendant returning to the US?

[1] The spelling 'Broket' is used in this website as a kind of lowest common denominator when no specific variant is being referred to, like Brocket, Brockett, Brockette.