Etymology of brocket - The Broket Archive

Etymology of the word brocket

Note: This Archive spells the word as brocket, except in direct quotes from sources which spell it differently. Similarly, as a place name it is almost always given a ‘c’ before the ‘k’.

The word left northern France for England; we find it in Anglo-Norman, British Latin and Middle English but not in middle or Modern French. Its ‘young deer‘ meaning appeared in England soon after the Norman conquest in 1066—possibly a little before—but would have been current in northern France long before.

Investigating the origins and development of the word brocket establishes the boundaries of the name. For the history of the name, see the separate page.

The overriding meaning of the word brocket down the centuries has been a young male deer—usually with single-spiked antlers. During the last 200 years this meaning has given way to the tropical meaning of ‘species of Mazama‘—small deer with short single-spiked antlers from Central or South America, of any age. In Scotland the word had an additional meaning as a past participle adjective from a verb brook, when it was usually pronounced slightly differently. Other recorded meanings are local rarities.

Originally the English word was northern French, but between at least the 12-18th C it referred solely to British deer. From Old French it passed through Anglo-Norman and Middle English to Modern English, with a side track into British Latin. Examples illustrate this.

in the International Phonetic Alphabet (IPA). The second syllable et—

—was a diminutive, suffixed long before the word came into English, as with pullet ‘a young hen’ or hatchet ‘a small axe’. A diminutive of the Old French

‘piece of pointed metal’, it is a mistake to link it to the Old English

The sounds of the consonants b, r, k and t have been stable since the word emerged. Other than a slight variation in the sound of the first vowel, the sound and form of the word have not changed throughout its history in English. Only exceptionally has it been spelt with two ts.

with stressed 2nd syllable and so a different final vowel.

The sounds of the consonants have been stable. But because the spelling of the k has varied, its sound needs a brief discussion.

as in   he broke it   is a voiceless velar stop.

as in   a diamond brooch   is a voiceless palatal affricate.

as in   brochur, brochette   is a voiceless palatal fricative.

A sound shift of

The IPA k sound of Latin cantare ‘to sing’ palatalised into English chant and French chanter. But k was a primary sound and often remained, as in English canticle and French cantique ‘hymn’.

were secondary; they didn’t evolve into k. Brochette could not have developed into brocket.

In Latin—and Old French until the late 12th C—the symbol used to write IPA k was not k but c. But because during the 13th C c assumed the value of IPA s before e and i—as in cent ‘100’—k was spelt either by adding h to the c to make a digraph ch, as in Christus or simply by k. So while pre-12th C Old French scribes might have spelt

Occasionally k was spelt qu, as in Afrique,1 Nequam and broque—but broquet has not been found.

This Old French ch digraph for k continued as an anachronism in England before i and e and 13th and 14th C scribes there spelt the word brochet or broket. Since there was no word brotchet with a

a brochet spelling was unambiguous, but Middle English nevertheless settled on the spelling broket. If they needed to represent the fricative

after a short vowel, Middle English scribes usually doubled the c or ch, as in cacche and cachche.2 The widespread—and otiose—addition of c before the k was an Early Modern English convention, not standard before the 18th C.

The sounds of the vowels have varied slightly:

The following simplified schema is not to be taken as a pedigree of descent. Based on written records it suggests probable development over time, with many variant spellings not included: 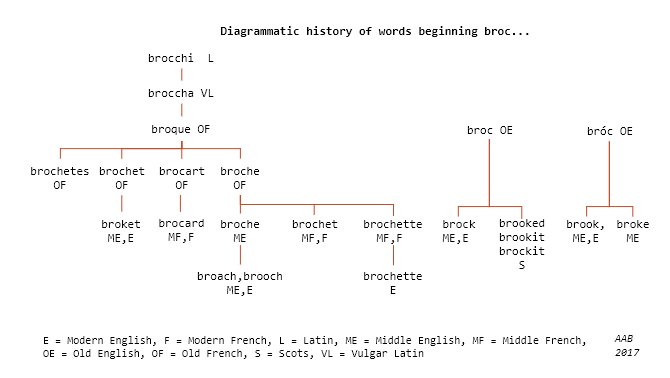 The et element was an Old French diminutive suffix, added before the word came into Middle English.

for something sharp and prominent. The first recorded form was as an adjective to describe projecting teeth: brocchi dentes.7 Perhaps it was Celtic in origin, as it is not found in Classical Latin.

The next recorded form was a feminine noun written broccha ‘piece of pointed metal’. This was in ‘Vulgar Latin’ when spoken Latin became ever more divided into local variants. This form carried on into Medieval Latin of the Middle Ages.8

4.2. The Old French stage of the form

After the 5th C the Vulgar Latin spoken in Gaul evolved into numerous dialects. Gaul’s northern dialects are usually grouped under the term ‘Old French’, divided into the likes of ‘Norman’, ‘Picard’ and the later ‘Anglo-Norman’ according to the way the language was spoken in these different areas.

While northern dialects did not palatalise k to

, examples of survival of which into Middle and Modern French are:
— broches

‘the first antlers of the male roe buck, tusks of the wild boar’,11 and of the red deer too.12
— brochet

‘fish with a pointed snout’.13
— brochette

From the Norman-Picard form came feminine and masculine diminutives:

The first recorded form is brokettus in British Latin from 1223 but it would have been in spoken usage before. It was first written in Middle English by 1307-27, although the earliest surviving record—spelt broket—is from a hunting text c 1410.24 By the 19th C the spelling was brocket.

The Modern English broach and brooch, spelt broche in records from 14-18th C, ultimately also developed from Old French broque/broche. The main signification of broach is ‘thin pointed object’, e.g. bodkin, and is the same word as brooch, restricted by spelling to mean ‘jewelled ornament with a hinged pin and catch’.

Two other subsidiary and rare meanings of the plural broches/brokes are recorded in Middle English:

These words were not in Old English or other Germanic languages.

These are completely different Old English words, found in neither Old nor Modern French:

To derive brocket from broc is like deriving pocket from poc ‘pustule’. That brocket ever meant ‘small badger’ is nowhere attested.

The young deer appears to have received its name by synechdoche—a device to describe the whole by a characteristic part. The characteristic of its post-calf stage—the way hunters identified it—was its small, single-spiked antlers so it was called after them. Anglo-Norman aristocrats and their retinue out on the hunt used their Old French word brochet ‘small spike’ to refer to the whole adolescent beast.

A metaphor is a device to describe something by what it resembles. Medieval candlesticks usually had 2 branches or spikes, resembling a brocket—as perhaps suggested by an isolated record from 1400-40 of broket in the plural meaning ‘candlesticks, torches or tapers’: ‘Preketes and broketes, and standertis by-twene’.35 This was in a different manuscript to the 1400-40 occurrence of broches with this meaning. One of the meanings of pricket here is similarly synonymous with torch.

In addition to the overwhelmingly predominant meaning of ‘young male deer’ there have been 4 local or rare meanings of the word brocket. Apart from the main Scottish one, they are rare curiosities. The heteronym broket is from brook.

This meaning has been well attested in Scotland—although now only in certain parts—as the past participle of a Scottish verb brook meaning to ‘become spotted [with soot or dirt], streaked [with tears or black and white]’. The Scottish National Dictionary gave an earliest date of 1578.36 Dictionaries cite cognates Danish broget and Norwegian dialect brokutt. It is spelt variously, e.g. brooked, brookit, broakit, brucket, bruikit, brewket, brocked, brockit, brocket:

The predominant pronunciation was

(i.e. with the first vowel as in ‘moon’) with a short variant

. It is not therefore strictly a homonym of brocket meaning a deer, however the vowel has been pronounced as in

‘My sister lost the brocket lam’ she got fae Tammie Durrit’ (1884) and from 1910 Peterhead referring to a century previous: ‘Oats were then mostly what was termed brocked oats…’38

The Dictionary of the Older Scottish Tongue recorded this meaning spelt brokit, brokkit, brocked.39 It also recorded broket with the usual English two-year old stag meaning. However in Scotland the word was also used as an attributive with hides—perhaps it was not forbidden to hunt them there?

A rare extension of the mixed-colour connotation was recorded from Ireland in the 1890s in a compound with ground: brocket-ground ‘a mixture of clay and boggy land’.40

Another rare, early 20th C Scottish meaning, probably from Norwegian braaka ‘to break’ cited by the Scottish National Dictionary meant ‘strange, clumsy’: ‘he had a broket way aboot him’, ‘to gang brokin aboot’ = to walk in a heedless way knocking things over.41

Two recorded dialectal instances from the Farne Islands near Holy Island off the Northumberland coast one from a Northumberland traveller in 1790 (or 1769) and another from a sailor’s word book in 1847.42

Some late 20th C online specialised computer glossaries and dictionaries cite broket as a term for ‘angle or broken bracket’ i.e. < or >. This may be ephemeral jargon and is currently too much of a neologism to merit inclusion in mainstream dictionaries.

The French brocard and the English pricket are similar words to brocket in form and meaning. Knobber is the modern Scottish equivalent of brocket.

Brocard was a continental Norman development from Old French broque with suffix art, later ard. The OED gave brocard as the origin of brocket. This was a mistake and has been corrected in subsequent Oxford Dictionaries. Many other dictionaries still follow the OED, however; other works too like Reaney.43 The OED also cited an obsolete English synonym brocard (from 1607 and 1611). Although these cognates also mean ‘young red deer’ they are collateral developments, not variants or precursors ofbrocket.

Brocard is found in contemporary French dictionaries as small as Cassell’s and recorded from 139444 meaning: le chevreuil mâle ‘the male roe deer’. Le Petit Robert added: d’un an environ ‘about 1 year old’, however it can be qualified to mean an older one: ‘l’expression vieux brocard s’appliquant à un animal de plus de deux ans’.45 In modern French usage it can likewise refer to older male roe deer—with subsequent antlers—but without necessarily having to be qualified:46

The male roe and red deer of specifically 12-24 months in France are called daguet (from dague ‘knob or spike’, compare the English dag ‘unbranched tine of a young stag’ and knobber).

The equivalent of French brocard in English is pricket, although referring in Modern English and British Latin to both fallow and red deer, and in Scotland to roe.

There are a couple of records of pricket meaning ‘torch, taper’ comparable to a rare meaning of brocket, e.g. ‘Candelis and oer priketis be set on candelstikkis’.51

Collier’s Encyclopedia said a 2 year old male is called a knobber and a 3 year old a brocket.52 Buffon’s Natural History from 1781 said,53 ‘They take the name of knobbers till their horns lengthen into spears, and then they are called brocks or staggards’—brock here being a rare and obsolete contraction. The OED described a knobber, or knobbler, as ‘a male deer in its second year; a brocket’ with citations back to 1686, also from 1664 as ‘the bud or rudiment of the antler’ itself.