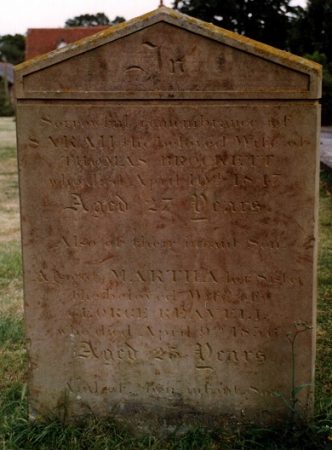 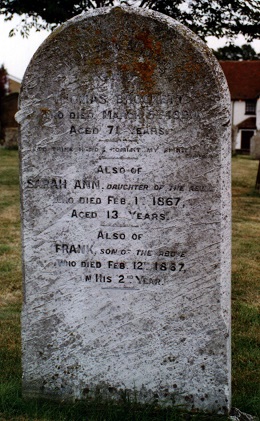 Son of Elizabeth d/o William and Ann HALL, William was baptised 13 May 1821 Guilden Morden, and married Amy TOOKEY 6 Apr 1847 in Royston New Meeting House. He was the third of the 3 first-cousins all called William in Guilden Morden in the 1820s and 30s. He and his family emigrated to South Africa in 1861. None were recorded again in the UK in censuses or the GRO. 3 sons and 1 dau born in England, at least 4 sons born in S Africa.

3rd son of William and Mary BUTCHER, John was baptised 19 Jan 1823 Guilden Morden. He married 1st Elizabeth BONNETT 7 Jul 1849 in Guilden Morden, both of full age of the parish, he a Carpenter, one witness was Elizabeth Brockett—presumably John’s sister, aged 18.128 Occupation Carpenter 1850,129 Joiner 1867.130 No record of Elizabeth’s death in the GRO 1853-67. John went to London, like several of his siblings. It appears that both his sons died in 1854.131 Son William died of cholera.