William Broket of the parish of Kempston, a couple of miles south west of Bedford, is the first Broket of Bedfordshire known so far. He was recorded in tax lists 1315-1342, and so was born by 1294.

In the 2nd half of the 14th C another William Broket, a Priest, was recorded in Roxton, Kempston and Elstow. He would have been born by the 1330s and was probably a relative of William and Ralph. He died at Kempston on 17 Jul 1390. 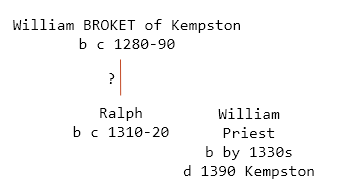 Figures show that there was considerable mobility into and out of the parish and the county in the early 14th century, so William could well have been an immigrant.

A search was made for Brokets through all Kempston entries in those Bedfordshire Subsidy Rolls that included Redbornestoke Hundred and listed taxpayers names from 1200-1600.4 William and Ralph were the only ones. Brokets weren’t recorded in Kempston again until the mid to late 1730s.

The steady rise in William’s payments suggests successful husbandry—his 1315 smallholding may have trebled in size by 1332, when out of 77 taxpayers in Kempston only 5 paid more than William. He had become one of the 6 richest members of the parish. The Kempston tax list from c 1341 had 6 oath givers and William was the 2nd.5

There was a gap in the lists between 1341 and c 1538, during which a Kempston / Redbornestoke Broket line could feasibly have continued, however their absence c 1538-44 suggests that it had died out or left well before.

3. Mobility in the early 14th Century

Kempston parish lies south west of Bedford in Redbornestoke hundred and had a population of 300-400 in the early 14th century.

On the face of it, of the 99 taxpayer surnames in 1309 only 33% were still in the parish a generation later in 1332. A 2nd third was in other hundreds and the remaining 33% were not anywhere in Bedfordshire.

Assuming an average age of 25 on marriage and 50 on death7 in the 23 intervening years between the subsidies, nearly all the taxpayers would have died. But even on the assumption that only half had sons, mobility was still apparently in the region of 50%.

Falling below the minimum level of assessment could account for some of this. Of the lowest 10 taxpayer names in 1309 Kempston, half were no longer recorded in Bedfordshire by 1332, 4 were found in other hundreds, and only 1 in Kempston. Surname formation could also perhaps account for some. The son of Richard Schepherde or Richard de Wylden in Kempston in 1309, for instance, could have been recorded as John le Fitz Richard in 1332. Conversely, unrelated people could have had the same surname or byname—at least with place names, like de Goldington. But occupational surnames should not be assumed to be non-hereditary, even at this time.8

Taking all this into account could still produce an overall estimate of mobility between 1309-32 of 30-40%. Furthermore, it was coupled with a general decline in prosperity in the village.

Notes: The column name in both years lists those surnames still in Kempston in 1332, and the column 1332 lists their tax.

Only 4 of the top 10 1309 taxpayer surnames were still in Kempston in 1332, and the value of their payments had dropped significantly.

2 were in other hundreds, 4 were no longer in Bedfordshire.

These figures indicate an approximate 60-65% mobility of families in and out of the wealthier stratum of the community.

With the majority of the wealthier men having left and 22% fewer overall taxpayers, prosperity in Kempston had clearly declined considerably over the 23 years.

[11] An asterisk indicates the same first name in both years.