The Brokets of Australia and New Zealand

The first Broket in Australasia was probably William Edward Brockett of Whickham, Gateshead, in the 1830s. Two brothers from Lesmahagow, Lanarkshire, Scotland were said to have been in Australia by 1860, and the 1870s saw 2 brothers in New Zealand from Gateshead and 3 separate families from the Bedfordshire Grouping settle in Tasmania and New Zealand. Others followed, such that members of most 19th C Broket Groupings and clans emigrated.1

Emigration to Australia and New Zealand from Britain before the 1850s was predominantly of landowners and convicts. The discovery of gold in the early 1850s changed this dramatically and up to two per cent of Britain’s population is said to have emigrated to New South Wales and Victoria during the 1850s. Thereafter people from all walks of life were attracted by the opportunities of making a new life.

It’s possible that shortly before 1836 William Edward of Whickham sailed to Sydney and then on to the Torres Straits between Cape York Peninsula and Papua New Guinea. He was the author of a 54 page book Narrative of a voyage from Sydney to Torres’ Straits, in search of the survivors of the Charles Eaton: In His Majesty’s colonial schooner Isabella, C.N. Lewis, Commander.2 His father John Trotter Brockett was a writer, and William Edward updated his Glossary of North Country Words as well as writing a short memoir of him after 1842, so it’s possible that William Edward didn’t actually sail to Sydney himself, but only wrote the account. His clan, however, was enterprising and two uncles had sailed to the West Indies.

The Castaways of the Charles Eaton by Gary Crew,3 is a new story about the wreck of the British vessel on the Great Barrier Reef in August 1834 and attempts to rescue the castaways from head-hunting natives, no doubt based upon William Edward’s Narrative.

2. William and John Brocket of Lesmahagow by 1860

Beyond the fact that these 2 had emigrated to Australia by 1860—recorded in FB, an unpublished family history—no more is currently known of where they went or if they had families. William was the eldest son in the large family of William and Barbara BROWN, farmers in Bellieshole, Lesmahagow, but from a different mother: Jean GIBSON. William had emigrated to Canada in 1831 with his aunt and uncle but returned home by 1841. There were then 7 younger siblings in the household, and by 1851 he had left again. Younger brother John was still in Bellieshole in 1851, aged 18, but by 1861 had left, perhaps to join William in Australia.

It’s assumed from records in Tasmania of 2 Bedfordshire brothers—Albert Lovell and Theed William—and from the lack of records of their parents and siblings in England after 1881 that this entire family emigrated. The parents were William and Charlotte CHAPPELL. William’s parents were Joseph and Sarah CORRALL and was born 22 Oct 1837. He gave his birthplace as Kempston in 1861, 71 and 81, but an IGI patron gave it as Bromham. His birth isn’t registered in the GRO—why, when his ?twin brother’s was, isn’t known.

He married Charlotte CHAPPELL 11 Oct 1859 Kempston, Bedfordshire, he a Shoemaker aged 21 and she a Dressmaker aged 20.4 William’s occupation in 1860 was Master Shoemaker5 and Shoemaker in 18616 but by 1865 he had become a School Master.7 The family moved to Tempsford, Bedfordshire, between 1862-5—perhaps when he became School Master. In 1870 William was probably a witness to sister Jane‘s marriage to Reuben. By 1881 the family, apart from eldest son Albert, were in Kent. After 1881 there are no apparent records in the GRO or IGI of any of the family apart from Albert Lovell’s marriage in 1885. Did they all emigrate to Tasmania soon after 1885?

Third surviving son of John and Ann JAMES of Bromham, Daniel was born 27 Apr 1842 in Bromham and died 9 May 1919 in Allanton, New Zealand of cardiac disease.32 He married Jane WOODWARD 30 May 1864 in Sandy Parish Church, he a Labourer of full age (22 on death certificate), she a Spinster under age.33 Daniel’s occupation 1872 Farm Labourer34 1919.35 On 16 Nov 1874 Daniel and Jane and 5 children sailed from Plymouth on the SS Rakaia and arrived in Canterbury, New Zealand 7 Feb 1875. Daniel contined working as a farm labourer in Allanton, Taieri, New Zealand until his death. Jane died 21 Jan 1929 in Oamaru, NZ.36

Another early emigrant family was the shoe-making family of Joseph and Emma from Northampton, England. They emigrated to Australia and on to New Zealand.78
5th son of John and Maria DARLING of Northampton, Joseph was baptised 3 May 1833, St Cuthbert, Bedford; d New Zealand 1881. He married Emma COTTERILL 28 Oct 1856 in the Independent Chapel, Berkhamsted,79 both residing Berkhamsted, Joseph of full age, Emma a minor. Berkhamstead is c 25 m S of Bedford and 32 m SSE of Northampton. Emma’s father John ran a brass and iron foundry. Emma may have borne Joseph 12 sons and 1 daughters, all but the last one or two in Northampton.

Eldest son Walter was the first to emigrate, aged 16 and for £1—arriving New Zealand 11 March 1874 on the barque Dilharee.84 He said his parents “were opposed to him going out to a country which they thought was peopled by savages”. Three or four years later Walter “took a trip back to England, and so impressed his parents with the possibilities of the new land that they returned to New Zealand with him.” This would have been a few years later as the Passenger Lists show that the family emigrated to Australia soon after twins Arthur Caleb and Emma Florence were born in 1876—son George was born in Sydney 1877. They moved on to New Zealand by 1881, where Joseph died 14 Jun ”’that year? ‘at his residence, London St, Bingsland, aged 49’, buried 16 Jun Avonside Cemetery.85 Bingsland was in Christchurch, now called Richmond. Emma died in 1887.86

Alfred, b 1858, 2nd son of Solomon and Jane MAY of the Morden clan. He is said to have emigrated to Canada or Australia as a young man and has never been heard of since. Brother of Charles Frederick and Solly.

Isaac, b 1856,125 bap 1 Feb 1857, Bromham.126 Oldest surviving child of Thomas and Mary TEBBUTT of Bromham. Some of the following information is from a 1988 letter from a descendant in Queensland, Australia. Isaac married Clara MAYES of Stagsden in S Kensington, London—where his sister Elizabeth KING lived—27 Aug 1883.127 Clara was b 1861. Isaac and Clara emigrated to Australia 1883. Isaac’s occupation: Bullock Teamster, carting wool from the Outback to coastal ports, later an Opal Miner. A daughter was stillborn in 1885 and a son in 1889, Clara dying in childbirth with the son. Surviving child: Jessie Mary, b 1886 Australia. Aged 16 found work in Rockhampton, Queensland, as Companion/Help to an elderly woman. Married at St Mark’s Church, Rockhampton, 6 Sep 1911 George William WORTHINGTON, issue 2 daughters, 4 sons. She died 1963. “She was very religious (Anglican) and didn’t have a sense of humour. She had a hard life looking after her husband, father, two brothers-in-law and other men who worked at the sawmill they ran in the Boyne Valley (West of Gladstone) – as well as five children”.128

5th son of William and Fanny BONNETT of the Mordens Clan, Henry George was born 1853 in Battersea, Surrey,130 and died 1929 in Northcote, Victoria, Australia. He married Mary PRUTTON 1875 in Arlesey, Bedfordshire.131

Eldest son of Solomon and Jane MAY of the Morden clan, Charles Frederick was born 5 Feb 1857 in Wandsworth, Surrey,160 bap 12 Apr St Mary Battersea.161 Brother of Alfred and Edward Solly.162 Charles was still living with his parents in Stotfold at the 1881 census, Carpenter’s son, unm aged 24. 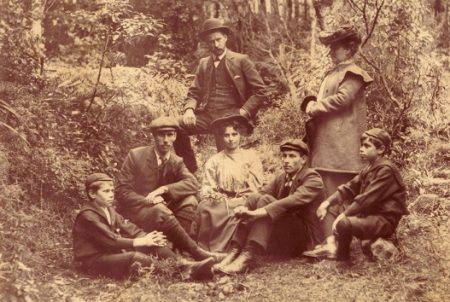 Charles became Inspector in the Public Works Dept in New Zealand165 and Clerk of Works.166 He oversaw the building of the New Zealand Government House in Wellington 1910.167 He died overseeing the building of a tourist hotel in the Mt Cook region, aged 55 on 16 Dec 1913 of Renal calculus and abscess 3 years and cardiac failure, at the Raw… Private Hospital, Gloucester Street, Christchurch, from Mt Cook, New Zealand, buried at Karori cemetery by an Anglican minister.168 He had 4 sons living aged 30, 26, 23 and 21 and one daughter aged 28.169 There is a picture of Dorothy in 1945, so daughter Bertha must have died before 1913. In 1916 Maria resided 26 Hawkestone St, Wellington.170 Children:

[1] Many thanks to many descendants for information on their families.

[8] Some of the information on this family was kindly supplied by Janet Rogers, 2011.

[25] IGI. Thanks to Michelle McConnell for information on this family.

[36] Many thanks to Briar McKeown of New Zealand (BM) and Janet Rogers of Australia (JR) in 2011, for information on later members of this clan. Details from BM are the first source, with additions and differences noted from JR.

[37] BM recorded Daniel and Jane’s first child as Sarah, b 1865, died young. The GRO recorded a Sarah Jane born that year in Bedford,(GRO qtr 3) but she was daughter of Charles and Mary Ann WESTON of Biddenham and Bedford, b 10 Jun 1865 Bedford St Paul,(Birth certificate) and who probably died 1867 Bedford District, aged 2.(GRO qtr 4) The GRO also recorded the death of a Sarah in Bedford in 1865,(GRO qtr 4) but she was Sarah, who died Bromham 14 Nov 1865, the wife of Joseph son of James and Lucy BATES.(TR) BM also conflated eldest son Frederick with Alfred, b 1870.

[65] Outram, Dunedin, according to JR

[72] Paeroa, Thams/Coromandel, according to JR

[78] Thanks to Roy Brockett and David Fossey of Australia, and Jessica, David, Stephen, Owen and Heather Brockett of New Zealand for information on later members of this clan,

[162] Much of the information about this family was kindly supplied by Anne Simpson of New Zealand, May 2002, from the Family Bible, and by Chris Brockett, Apr 2017. Anne deposited a number of papers and photos of the family in the National Library of New Zealand at goo.gl/vGsWFu (accessed 2 Sep 2018).