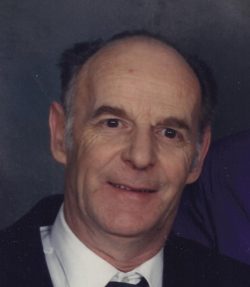 In the wider Broket DNA project Ronald is in Genetic Group 3.1

His marriage certificate described Ronald James Brackett as a Bachelor, aged 23, Logger in the Lumber industry, resident of Pender Island, BC, Canada, place of birth Ganges BC, son of Clifford Ray Brackett and Verna BOWERMAN. The marriage was at 345, West 12 Ave, Vancouver, BC, on 4 Apr 1951.2 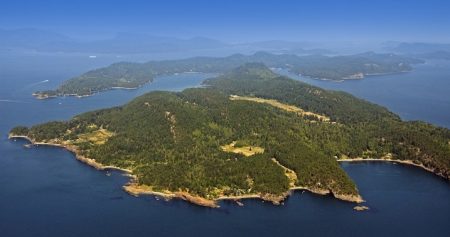 Ronald was the son of:

I was born in Westminster on July 12, 1892 in a house located on 12th Street. I do not remember much about Westminster as we left when I was 4 years old.

Father worked in a monumental shop for Mr. Alex Hamilton who had a place on Pender Island.

Dad purchased 160 acres next to the Hamiltons at Browning Harbour. In the summer of 1896 a scow load of lumber was brought over. The lumber was used to build four houses. We stayed that year and finished the house. Dad went back to work. The houses were all located across the bay.

The Hamilton’s had five children, 4 girls and one boy, our family had seven children four boys and three girls. We all had to walk three miles to school. There were only four families on the island….

We had to row to Saturna island to get our mail at the Post Office. All our groceries were from Mayne Island or Sidney and the only way to get there was by a row boat.
When we first came to the island Japanese were cutting and burning alder to make charcoal, some of the original pits can still be found. Chinese cut firewood and mine props were loaded on ships. These props were used in the old country mines.

Some logging took place near Wallace point in the early days. As many as six oxen used at one time to move the logs to the salt water.

Standing right to left in the picture below are Ross, Cliff, and Alex Brackett and then Jim Hamilton with 4 Hamilton sisters seated in front and the Brackett sister on the far left, c 1908: 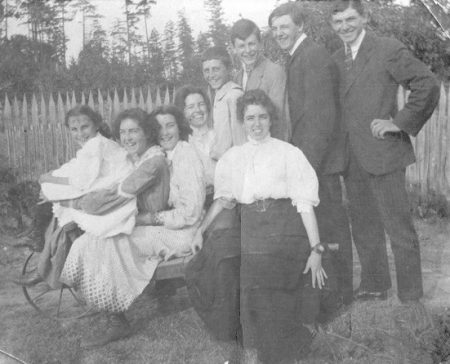 and the couple with their first child: 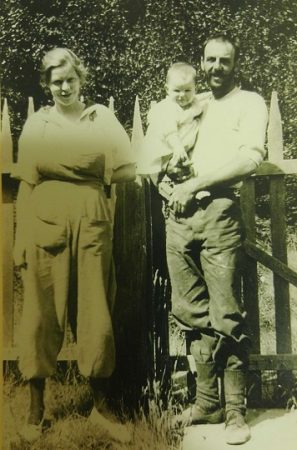 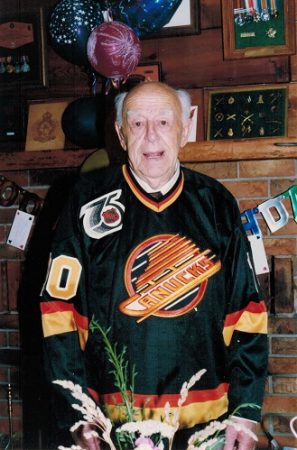 Clifford Raymond was the 2nd son of:

James Alexander as a young man: 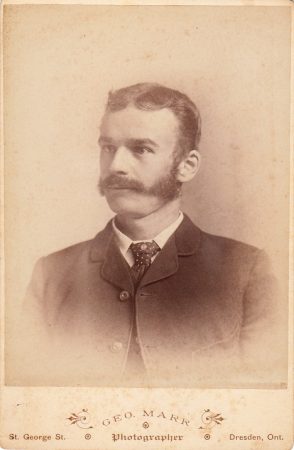 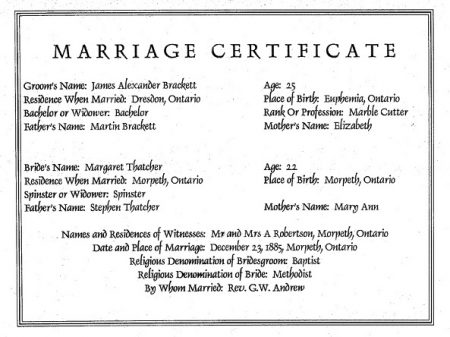 Signature of James Alexander on 4 May 1910, aged almost 50, on his father Martin’s Death Certificate:

Two accounts of the lives of the Bracketts and their neighbours vividly describe life on a BC island at the turn of the 19-20th C.13

1. Memories of the Brackett Family in the late 1890s by MW Hamilton:14+Read more

Mr. J.A. Brackett married Miss Margaret Thatcher in the town of Dresden, Kent County, Ontario. When Rose, the eldest of their family, who was killed in World War I, was a baby, they came west and settled in New Westminster. The name “Brackett” goes back to the days of Upper and Lower Canada, Mr. Brackett ‘s great grandfather having been a resident of Upper Canada.

Two more sons were born in New Westminster. Then while the family was summering on Pender Island, whre Mr. Brackett had pre-empted land on the shores of Browning Harbour, the great New Westminster Fire of 1896 destroyed their possessions. Like the Hamilton family, whose possessions suffered a similar fate, they stayed on on the island, becoming permanent residents. The rest of the family – three girls and a boy – arrived later. The original house was built in 1896; this was added to as the family grew. (The house is now being demolished by the youngest son, Lyall, and a modern residence erected, 1961.)

For many years the island residents, particularly those in the Browning Harbour area, had their lives guided to a certain extent by Mr Brackett’s ingenuity. This took the form in the guise of a gong known as “Brackett’s Bell”. This gong consisted of an “T” [misprint for I?] beam about three feet long and 18 inches high. It was hung on chains between two fir trees in the front yard at a height of about 25 feet. An eight pound sledge was the striker. It was so rigged that a person standing on the ground could operate it by pulling on a long pole which was hinged to the hammer handle. The result was a not unmusical note which could be heard for some miles. Every day at noon Mrs. Brackett struck 12 strokes, calling the menfolk of the valley from the fields, or woods, or bay to their respective lunches. Other signals consisting of a certain number of strokes, called individual family members. There was also one signal calling the Hamilton family across the bay into shouted conversation. On the stroke of midnight, each December 31st, the bell rang in the new year which many lusty strokes, accompanied by gun shots; and, weather permitting, there were shouted new year’s greetings exchanged across the bay with the Hamiltons.

Mr. Brackett construct a wonderful swing between the two “bell trees”. This was greatly enjoyed, not only by the family, but by many neighbour youngsters. Also a high bar was rigged nearby. When these amusements palled there was “Dan”, the old white horse who spent his declining years around the yard, and did not seem to mind how many youngsters climbed aboard for a ride. There was an abundance of fruit in the nearby orchard. The prunes especially will long in the memories of those fortunate enough to have eaten them when they were dead ripe.

The Brackett’s water transportation was provided by a 18-foot, double-ended, Columbia River fishing boat. The boys learned the art of handling her under sail in the safe waters of the harbour. When Mr. Brackett was working at the Taylor quarry at Potato Bay on Saturna Island the boys rowed or sailed over many times to bring him home on weekends.

A very fine young team replaced “old Dan”. A Clydesdale mare named Flora, and a solid, sharp eared ?Pereberott named Jennie. Under Mr. Brackett’s guidance the team became wonderfully well trained, obedient animals. They did a great deal of work in the clearing of new fields, hauling logs from the woods, as well as the usual farm chores. They also provided power for the wheeled transportation, and on a few memorable occasions, when there was sufficient snow, pulled a great sled packed with straw, and loaded with family and neighbours, over the Island roads, to the accompaniment of sleigh bells and a suitable songs. No doubt these occasions, though few in number, brought back memories of their young days in Ontario to Mr and Mrs Brackett.

James and Margaret in later life: 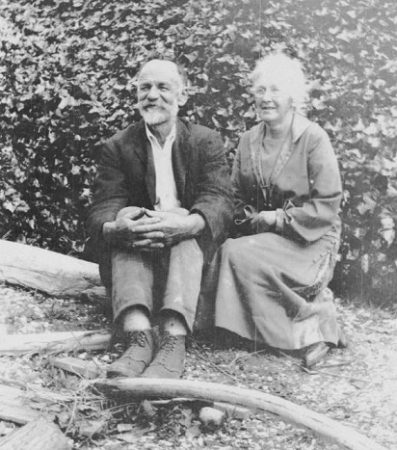 From this it appears that Martin was b c 1837, a son of Jonathan and Mary Brackett. For Jonathan and Mary’s family and his earlier ancestry, see this separate page. After Christopher, Jonathan’s father, none of this Brackett line featured in the 1907 Brackett genealogy.

Martin married Elizabeth FERRIS who lived 1828-1875. On 10 Jun 1880 the census recorded what looks like Martin Bracket, aged 42, born in Canada, as also both his parents, Farmer, in Hopkins, Allegan Co, Michigan; with wife Laura, aged 43, born in Ohio; 2 stepdaughters Edna and Amy NELSON, aged 14 and 9 and born in NY and MI respectively; and a six month old daughter Irene Bracket, born in December in Michigan.19

In 1887 both Martin Bracket and John Bracket were mentioned as siblings of Newman Bracket of Euphemia in his Will.20

Martin’s Death Certificate recorded his death on 3 May 1910 on Pender Island, Victoria, BC, aged 74, Farmer, Baptist, born in Bothwell, Ontario. This would place his birth c 1836.

2. Some analysis of Ronald’s Y-DNA results

Comparing 37 markers, the following matches were recorded for Ronald in the FTDNA database (Genetic Group 3), as of Apr 2018:

Harold E BRACKETT 1916-81.
William Leroy BROCKETT 1925-2008.
+++
Discussion: This is interesting. William Leroy, son of Richard, both lifetime residents of New Haven, traced their descent from John Brockett of New Haven, the original immigrant. The ancestry of both Harold E and Ronald has been traced back to Christopher Brockett/Brackett as 3rd cousins. Christopher apparently descended from a different grandson of John Brockett of New Haven. This would make Harold E and Ronald 6th cousins of William Leroy. The single-marker mismatch is between Ronald and the other two. The other two, even though more distantly related, have an exact match. No mutation therefore occurred in 7 or more generations between Harold E and William Leroy. The mutation occurred between Harold E and Ronald after the grandson of Christopher, i.e. within the last 3 generations. See the image at the top of the separate page.

[1] Many thanks to Cheryl Brackett for generously sharing her research and kindly supplying information. Where a source isn't mentioned, the information will be from her.

[3] Permission to reproduce this image was sought in Oct 2018 from the Pender island chamber of commerce who displayed it on their website but they didn't respond.

[5] Typed by himself and kindly supplied by Cheryl Brackett.

[6] Marriage Certificate, Register no. 1429. Breadalbane House is a heritage Queen Anne house that was built for Rev Dr John and Agnes Campbell.

[7] On her Death Certificate.