Preservation of the name - The Broket Archive

Essex: The last of the Spains Hall Brockets

1. Preservation of the name

In earlier centuries half of all male succession lines in England are said to have died out within 150 years. The Willingale Brockets are an example: despite 4 surviving sons in the first generation the patriline failed twice. Schemes for the continuance of a name when the patriline died out were usually a concern of the aristocracy, but here a minor-gentry family attempted to keep their name associated with their land.

The two traditional strategies were:

The second, with strong elements of the first, can be seen spelled out in the Wills of William Brocket (d 1791)1 and Stanes Brocket Brocket (d 1873).2

His only son having died young, the third-generation William Brocket Esq (d 1791) stipulated in his Will that any future principal inheritor of the estates must take the name and arms of Brocket only, including any husband of a sister:    Read more

Thus in 1834 the eldest son of William’s daughter, Stanes Brocket Chamberlayne Esq, then aged 52, changed his name by Royal Licence on the death of his father and became Stanes Brocket Brocket Esq, in order to inherit the lordship of Spains Hall. 35 years or so later, faced with similar circumstances to those of his grandfather and strongly echoing his Will, Stanes made similar requirements in his own Will:    Read more
And as to my Manor of Willingale Spain and all and every my real estate whatsoever I give devise and bequeath the same to [an elaborate order of succession] and I do hereby expressly declare that every person who by virtue of this my Will shall become entitled to the possession of the said [Estate] and who shall not then use the surname of Brocket and quarter the arms of Brocket with his or her own Family arms shall and do within the space of one year next after he or she shall so become entitled as aforesaid…
++++++
And I do hereby further declare that in case any of the said persons shall refuse or neglect to take use and bear such surname and arms then after the expiration of the said space of one year the use and estate shall absolutely cease determine and be void And immediately thereupon shall be and remain to the person who would be entitled thereto if the person refusing as aforesaid was then actually dead4

Thus nearly 40 years later, in compliance with her father’s Will in order to inherit the lordship of Spains Hall, Stanes’ younger daughter, the widow Mary Meryon changed her name back to Brocket by Royal Licence after the death of her spinster elder sister in 1896.

The men saw themselves—William perhaps more so than Stanes—as the last in line of an ancient Willingale family. But Mary did not feel such a strong allegiance to the name, nor indeed to Willingale. In her Will she made no reference to the inheritance of Spains requiring the name of Brocket. Great grandfather William Brocket was a distant figure—dead for over a hundred years. Mary, a Chamberlaynefor the first eight years of her life and a Meryon for 30 years, without a single living Brocket relative, asked in her Will:   Read more

to be buried in the Cemetery at Rye aforesaid in the vault with my husband and child and thatmy name on my Coffin and the Gravestone be ‘Mary Widow of Charles Pix Meryon’.
These wishes were fulfilled in 1906 on a memorial on the south wall of St Andrews and All Saints in Willingale. It shows the very last trace of the Brockets of Willingale—the second forename of Mary’s only child, Stanes Brocket Meryon, died less than 3 months old.

Despite all the attempts at preservation the Brocket name and arms finally did come to an end in Willingale.

The College of Arms in London holds a pedigree drawn up in 1834 to support the use of the Brocket arms by Stanes Brocket Chamberlayne as he sought authorisation by Royal Licence to take the name and arms of Brocket only and so become Lord of Willingale Spain.5 The Pedigree makes extensive reference to Wills. Considerable research had been done in the probate registries in London. Being an Attorney at the Middle Temple in London, Stanes Brocket Chamberlayne would have been well placed to commission the best in the College of Arms to conduct this work. He may well also have had access to the admission records of the Middle Temple, and that of his ancestor John Brockett of Willingale, who was admitted 10 Jul 1672 as “2nd son of Charles Brockett, of London, gent. deceased.” This appears to have been John’s claim on admission to a better lineage than he had. In the first half of the 17th C there were two Charles Brocketts in London of a similar age, each with:

London was a small world in those times, by 21st C standards, and related London Brockett families would probably have known, or known of, each other. The future head of the Willingale clan, John of the Middle Temple was the 2nd son of Charles, Citizen and Fishmonger of London. He may well have known Charles Gent and his family and probably his and their lineage.

No Will has been found for Charles, neither baptism, marriage nor burial record. However, he must have been the Charles left a bequest, as a son, in the Will of John Brokkett of Codicote Gent, written 9 Feb 1648/9, see the separate page. The 1860 Gateshead Pedigree—based in this its lower section largely on Spains Hall mss—had him as a son of that John. He was a member of the Fishmongers’ Company, and Company and other records provide further information about him and his wife Joan and their 5 children, see the separate page. In this context their 2 eldest sons Charles and John are relevant, particularly John, progenitor of the 2nd Willingale clan, see the separate page.

This Charles’ Will survives from 1662-3.6 After the lifetime interest of his wife Anne BRISTOW, their 2 young sons were the principal beneficiaries:    Read more

Item all the Rest and Residue of my Goods, Chattells, Debts, money and other Estate whereof I am possessed or is any due or belonging vnto mee (my Legacies and Funerall Charges first discharged) I give and bequeath vnto my two Sonns Charles Brockett and John Brockett equally to bee Devided betweene them, to bee paid and deliuered to them with the benefitt to bee made thereof att their respective ages of One and Twenty yeares
Charles’ younger son, John, was also singled out by his uncle William of Wheathampstead Gentleman, who wrote in his Will of 10 December 1675:
I doe give and bequeath unto John Brokett my brother Charles sonn the Summe of One hundred Sixtye Six pounds to bee paid to him at the age of one and twenty yeares

This Charles is only recorded therefore with the 2 children:

So was John of the Middle Temple, purchasor of Spains Hall, the son of Charles Citizen or of Charles Gentleman?

The author of the 1860 Gateshead pedigree clearly did not subscribe to the descent through Charles Gentleman, nonetheless diplomatically omitted the line linking Charles Citizen to John of Codicote. This subtlety was overlooked in EJ Brockett’s 1905 reproduction.

The College of Arms pedigree was a proof of descent drawn up in order to award a grant of arms, the Gateshead pedigree was independent research. If there were doubt as to which descent were correct, the benefit of the doubt should go to the latter. In fact there is little doubt. The Will of William of Wheathampstead 1675 is sufficient evidence. 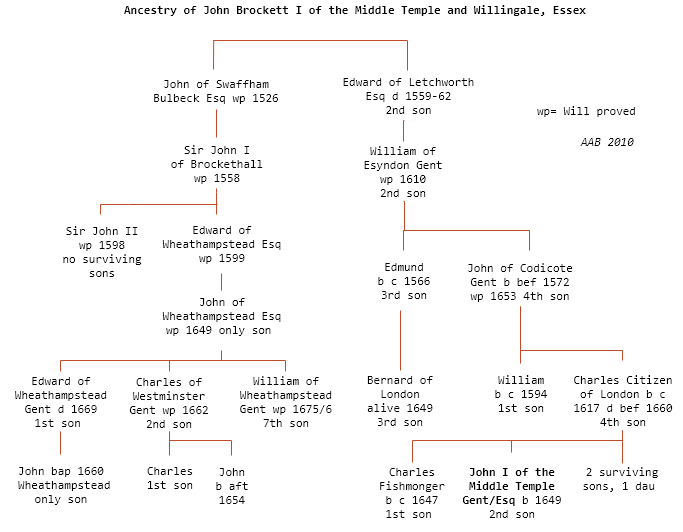 It is possible that the College of Arms pedigree was to support the use of the undifferentiated Broket arms. The Spains Hall clan considered themselves—and rightly so—the only remaining landed heirs of the earlier dynasty, and as such had the right to bear the arms in their eldest-son form.

The line of Charles of Westminster may well by then have been the eldest surviving line of that whole dynasty—it is not known what happened to John s/o Edward. Charles’ father John was the eldest grandson of Sir John I, the dynasty’s most prominent eldest son. The Spains Hall clan would have known of the grand, alabaster tomb of Sir John and his wife dominating the Brockett Chapel in the Church at Wheathampstead. It was well within a day’s reach of Spains Hall.

The line of Charles, Fishmonger and Citizen of London, on the other hand was very much a cadet one. Charles was the 4th son of a 4th son of a 2nd son of a 2nd son. The arms of Bernard Brockett, another member of this cadet branch were recorded differenced with a mullet—a star of five points pierced in the centre—to show his 3rd son descent. Stanes Brocket Brocket should have had a yet more junior differencing.