In the wider Broket DNA project Harry is in Genetic Group 3.

Harry Doyel was the son of: 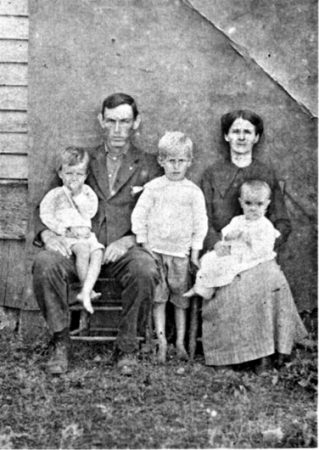 1920 13 Jan: The census recorded Robert O BROCKETTE, aged 34, Farmer on a rented General Farm, and wife Mattie E, 30, were living in District 7, Macon Co, Tennessee, with their 5 children: Carlos E, aged 11, Williard E, 8, Zelmia F, 6, Mabel E, 4, Herbert O, 1. The whole family was recorded as born in Tennessee, apart from Otis’ father in Missouri. The next 3 households were 3 other Brockette farms: those of Harvy H, owned, aged 60 [see below], Hubert C, 21, rented, and Henry C, 24, rented; all 3, like Robert, were Farmers on a General Farm.9 This is the earliest record of the BROCKETTE spelling of the surname for this family.

Robert Otis was the son of:

1870 1 Jun: The census recorded Harvy H, aged 10, born Missouri, was living in Macon Co, Tennessee with his parents Marlin L and Tabitha BROCKETT [see below] and 7 siblings, apart from himself all recorded as born in Tennessee.14

1880 25 Jun: The census recorded Harvy H BROCKETT, aged 20, Laborer on farm, was living in Macon Co, Tennessee with his parents Marlin and Tabtha [see below] and 10 siblings, everyone born in Tennessee.15

1910 13 May: The census recorded Harvy H BROCKET, aged 49, Farmer on a rented General Farm, perhaps from his father, and wife Sarah E, 51, married 24 years, 5 children born, 4 still living, were living in Macon Co, Tennessee, with 2 sons Henry C, 15, and Hubert C, 12, next door to his parents Merlin M and Tabitha F [see below]. Everyone was recorded as born in Tennessee, except Harvy in Missouri, and Marlin’s father in S Carolina and mother in Virginia.16 There was another Harvy Brocket, living nearby, aged 84, on own income on a farm that he owned without mortgage like Merlin, with wife Mary J 68, married 50 years, 9 children born, 1 still living: Ben E, aged 32, self-employed Farmer on a General Farm, and his wife Rahel, aged 20, married 11 months.17 [Was this Harvy a brother of Merlin?]

1920 13 Jan: The census recorded Harvy H BROCKETTE, aged 60, Farmer on his owned General Farm, and wife Sarah E, 60, were living in Macon Co, Tennessee, with his widowed father Marlin L, aged 89. There were 3 other Brockette farms next to Harvy’s, those of his 3 sons Robert O, 34, [see above], Hubert C, 21, rented, and Henry C, 24, all rented, perhaps from Harvy. All 4 were Farmers on a General Farm. Everyone was recorded as born in Tennessee, except Harvy in Missouri, and Marlin’s father in S Carolina and mother in Virginia.18 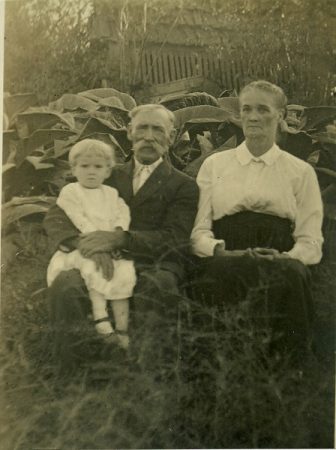 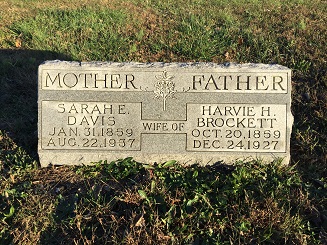 Harvie was the son of:

This image of Marlin and Tabitha is of painted portraits of them:25 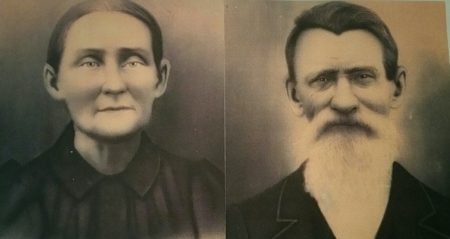 1910 13 May: The census recorded Merlin M BROCKET, aged 79, living on own income on a farm that he owned without mortgage, with wife Tabitha F, 70, married 54 years, 14 children born, 10 still living, in Macon Co, Tennessee, with live-in mouse maid Ann Patterson, aged 55, and next door to his son Harvey H and family [see above].26 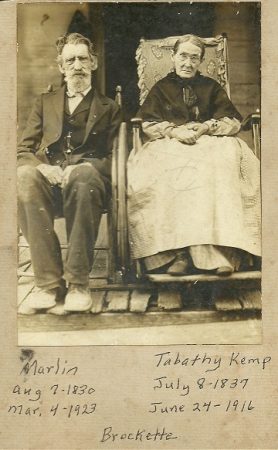 Was Tabethy in a wheelchair?27 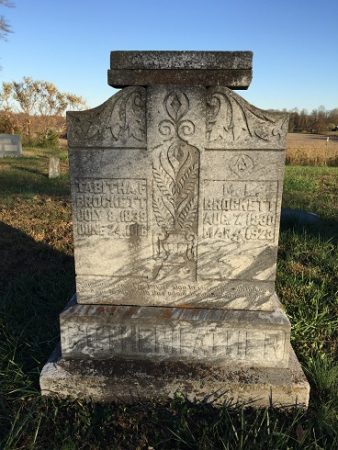 [23] 1870 US Federal Census for District 7, Macon Co, Tennessee, p 10. The Assistant Marshal was J H Brockett. Harvy H wrongly transcribed as Harvy U and Charley B M as Charley Bell.

[25] Many thanks to Vi Poland for the image.