The first Brokets that have been found in London are 2 families in the 15th and 2 in the 16th.

Hugh Broket was one of 3 defendants alleged to have trespassed with force and arms on land in Havering-atte-Bower (c 15 m NE of the City of London) in a Court of Common Pleas case in Michaelmas term 1420. They all denied the allegations and the case was ordered to be heard by jury:1   Read more

Hugh could well have been the uncle of Richard, alive 1454.

John Broket senior of the City of London 1405

John Broket senior was one of 8 Jurors alleged to have committed embracery (corruption) in London in a Court of Common Pleas case in Michaelmas term 1405. In John’s case it was gifts of 4 marks in the parish of St Mary Colechurch in the City of London and one breakfast worth 40d in the parish of All Hallows, Honey Lane, City of London. They all denied the allegations and the case was ordered to be heard by jury:2   Read more

Most probably a daughter of Thomas the Remembrancer, Parnelle Broket was a go-between in 1419 for the Exchequer to pay £100 to Queen Joan of Navarre, Henry IV’s second wife:3   Read more

To Joan, Queen of England. In money paid to her by the hands of Parnelle Broket and Nicholas Alderwych, in part payment of a greater sum due to the said Queen upon a certain private agreement made between the said Queen and the present Lord the King; and especially concerning the marriage of the Earl of March, purchased and obtained from the said Lady the Queen by the said now Lord the King whilst he was Prince of Wales. By writ of privy seal, &c., £100.
The Treasurer Lord Henry Scrope, whom Thomas worked for, had also invested heavily to assist the Earl of March.4

Richard Broket was a Citizen of London, a member of the Fullers’ Company, with an apprentice and a widower at the time of his death. This suggests a birth 1390-1410 and completion of apprenticeship 1411-31. Richard would most likely have lived and worked in London c 1400-54. No Citizen record has been found for Richard; few have survived this early. 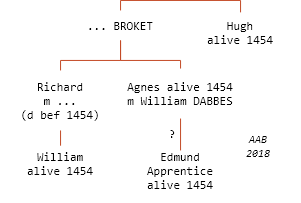 Fullers were an important link in the wool production chain. They cleaned or thickened cloth by treading or beating it in large brass pots. Richard’s testament was written 29 Aug 1454, proved 6 Sep 1454.

Thomas Broket was Remembrancer to the Treasurer in the Exchequer, Westminster. He was Lord of the manor in Appleton, Yorkshire. Further details here.

William Broket of the Exchequer, Westminster 1433

William Broket worked as a Clerk in the Exchequer in Westminster. He had good contacts: he served at least 3 justices —his ‘Maisters’ John Martyn, John Cottesmore, and William Paston—who advised him on a matter in the case brought by Danvers. The Master of the Rolls, Gerard de la Hay, had also arranged for him to gain access to the records in the Tower. The Master of the Rolls at that time was the guardian of all charters, patents, etc, entered upon parchment rolls, and the adviser and most important assistant to the Lord Chancellor in the old Court of Chancery.5 To have had this man’s help William must have had some influence. William was also clearly well educated—to have been a Clerk he would have been in minor orders—and he used his own seal for letters.

William in all likelihood was the son of Thomas Broket, the current Treasurer’s Remembrancer:

It was probably he also, who as William Broket, Gentleman, stood surety for Michael Thomas, Brewer, defendant in a Court of Common Pleas case in Easter term 1428 against an allegation that he assaulted Gilbert Burdeux with force and arms at London.7 Other sureties for the defendant were John Boure, John Holme Gentleman, and Thomas Ardern Gentleman.

In 1433 he was found guilty of tampering with official documents in an action brought by Robert Danvers. It was a high-level case concerning the integrity of Government records and was heard before the Lord Chancellor of England in person in the Star Chamber in Westminster. Danvers won the case and William was banned for life from working with the king’s records. No further record of him has been found.

Three Merchant Citizens of London are recorded—a Baker and a Goldsmith at the beginning of the century, originally from Northumberland, and a Cheesemonger in Southwark at the end—probably from Hertfordshire roots. This Southwark Merchant generated the first traceable London Broket clan. Young Brokets sent for apprenticeships tended to stay, eldest sons who came for schooling at the Inns of Court returned to country residences. Meanwhile throughout the century members of the Hertfordshire clan had dealings in London, especially the MPs and Sheriffs.

Thomas, who married 1595, was the progenitor of a London merchant clan flourishing in Southwark for more than a century. Gray produced a fine, unpublished pedigree of this clan in 1998. Thomas was a Citizen and Fishmonger of London, and like his son and grandsons after him was a Cheesemonger by trade. In the record of his son Joseph’s christening in 1600 Thomas was called “Chaundler”.

Freedom to Livery Companies usually came soon after completion of an apprenticeship, which was normally arranged to expire at 21.8 So Thomas probably completed his apprenticeship c 1590, but there are no separate Cheesemonger Apprenticeship records. The 1st index of admissions to freedom of the Fishmonger Company dates from 1593, but it doesn’t include Thomas. He probably therefore gained his freedom 1591 or 92. The Quarterage Books date from 1610, by which time Thomas was a Yeoman of the Company, paying quarterly membership fees of 20d for 1610-3, 32d for 1614-5 and 24d for 1616-8,9 but was registered dead for 1618-2.10

Thomas was in all probability from a cadet Wheathampstead line—that of Robert Gent of Bramfield:

Thomas married Ann PAR 2 Oct 1595 St George, Botolph Lane, London. After the early death of his eldest son he married his 2nd son to a Merchant’s daughter with connections to the Rasing and Harvard families. Children: