The earliest records found of Brokets in Essex are from 1356, 1382 and 1424. Next in 1438 the young Yorkshire Broket Edward, son of Thomas and Dionisia, acquired land there. But none of his descendants—including 3 Sheriffs of the County—resided in Essex until Edward, a younger son of John of Swaffham Bulbeck, married an Essex heiress a century later and settled in Willingale, near Chelmsford. Two separate but related Broket clans thrived there, with a 50 year break, through to the early 20th C. Records show only a few other Essex Brockets. 7 were there in 1881 and 6 in 1901. Of course parts of SW Essex have been subsumed into Greater London, and Hertfordshire borders it to the west and Cambridgeshire to the NW.

Two traders are recorded: Philip of Hedyngham in 1356 and John of Tendryng in 1382. They would probably not have come from an established line—no Brokets were taxpayers in Essex in 1327 for example1—nor apparently did they leave one. Although in 1424 John Broket was recorded as a former owner of a messuage in Wethersfield, near Braintree.2 It isn’t known how much earlier John had been the owner of the messuage, but Wethersfield is c 5 m W of Sible Hedingham and c 34 m W of Tendring, so if this John was related to either of the two earlier recorded traders, it may have been to Philip. But this is just speculation. Equally, he may have been the John Brokett recorded in Hatfield in 1428, about 45 m to the west of Wethersfield.

The next Essex records found are of land transactions made by brothers Edward and Thomas from Yorkshire and Hertfordshire, who also established no Essex line—no Brokets were taxpayers in Essex in 1524/5.3 There was an IPM into Thomas’ Essex lands held in chief, but despite being Thomas’ heir, there was no inquisition on Edward’s death, nor any mention of land in Essex in his will. Many of their properties were within 10-15 miles of Willingale, near Chelmsford:

Brokets may not have held substantial land in Essex from the 1480s until 1543—the VCH has no references—but they were nonetheless influential in the County throughout this period. The 16th C, especially its middle decades, were the peak of the dynasty’s fortunes in neighbouring Hertfordshire. Three became MPs for Herts, 3 became knights, and 3 held the influential office of Sheriff of Essex and Herts:

John of Wheathampstead’s son John of Swaffham Bulbeck held land about 40 miles north of Willingale in Cambridgeshire through his wife. Their 1st son, later Sir John I, was Escheator for Essex in 1539, aged about 26. Their 3rd son Edward conveyed land near Willingale in 1543 and later resided and died in Sawbridgeworth, just over the Essex border into Hertfordshire.

Families of a few generations are recorded to the east of Colchester, in Waltham Abbey on the western edge of Essex and one in Southminster on the Dengie peninsula.

The parish of Waltham Abbey (formerly Waltham Holy Cross) is on the western edge of Essex, c 16 m N of Westminster and c 9 m S of Ware. A Broket family was recorded here 1717-66. Coincidentally—or perhaps not—there was also a Braket family recorded 1754-1801. 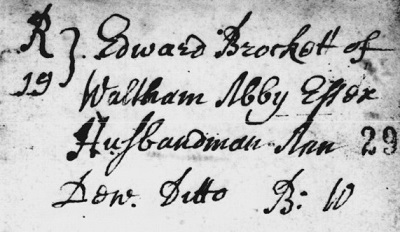 It was probably this couple who baptised the following children in Waltham Abbey/Holy Cross:

1711 20 Feb: Sara Brocket married Edward MARTIN in Sheering.15 Sheering village is situated c 3 miles NE of Harlow, 4½ miles S of Bishop’s Stortford, c 11 m NE of Waltham Abbey and c 27 miles NE of Westminster. Was she “Sarah Brockett the daughter of John and Sarah” baptised 17 Jun 1673 in Westminster, London?16 Or, more likely—because of her age—was she the eldest daughter of William and Sarah, baptised 1687 in Guilden Morden, c 35 m N in Cambridgeshire?

1769: Will of Edward Brockett Wheelwright of Southminster.17

1773: Will of Mary Brockett Spinster Southminster.18

[7] TNE C1/66/400. Lambourne is at grid reference TQ4896 (Ordnance Survey Gazeteer), Chigwell at TQ4393 and Theydon Bois at TQ4599 are respectively about 5 and 2 miles SW of Epping and Stapleford Abbotts is at TQ5095, about 4 miles SE of it. Rothyng St Botall has not been identified; is it one of the Rodings 3-5 miles north of Willingale? St Botolph?